Manga Review (plus some rambling on what I am watching): Akuma no Riddle volume 2 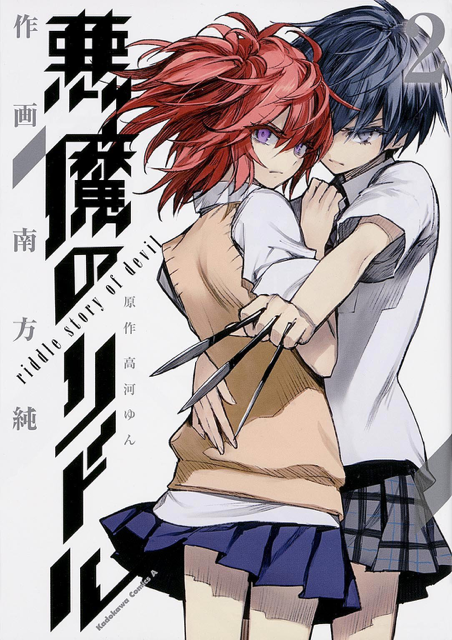 Volume 1 introduced Tokaku, an assassin, Haru, her target, and the other members of their, haha, high school assassin class, who all want to kill Haru. Volume 2 finishes establishing the rules of this series, showing us that the incentive for the assassins to kill Haru is that whoever succeeds will be granted pretty much anything she wants.

First up is Otoya, the serial killer who wants legal immunity for life and pretends she wants to be Haru's friend like Tokaku to get her to let down her guard. Unlike in the anime, here Haru isn't knocked out and tied up by Otoya. On one hand, I missed seeing Haru kick Otoya and manage to get away despite being tied up. On the other hand, I'm glad she didn't get stripped here. She uses the same method as in the anime to neutralize Otoya as a threat, but comes to the knowledge she needs for it differently. In the anime, there's some set-up for it, while in the manga, Haru turns out to have the knowledge about what to use when she's running from Otoya. It feels more deus ex machina-ish that Haru happens to find what she needs right when she needs it without knowing it's there (and I liked the karma of Otoya's initial "weapon" being used against her in the anime), but I like the idea of Haru having ways to do what helps her in this situation memorized for self-defense. In either version, Haru's reaction to Otoya makes her more interesting. Otoya obviously isn't likable, or someone you're supposed to like, but she is effectively creepy. We also get mention of Chitaru's motivation for being in Class Black, which isn't Haru, and mention of Haru's most plot-relevant ability.

The next assassin is Kaminaga, who I remember as the least interesting assassin. Her backstory is being an orphan who is part of some kind of assassin group fronted by nuns. It's an amusingly pulpy backstory, but Kaminaga herself is still very forgettable. She wishes to be able to quit being an assassin, but why she has to kill Haru to make it come true doesn't fully make sense. She has apparently always sucked horribly at her job and it looks like no one in her group except her dead mentor ever liked or believed in her, so why would her group keep using her for assassination assignments? Why is she here?

Haru continues to be squirrelly about her past to Tokaku, and we see a little more of it. After each assassin fails, she gets transferred out, and their teacher Mizorogi-sensei, who is there to be the cheerfully oblivious grownup in a story about teenagers, is sad and bewildered by it. Cue the first portion of Haruki's arc, which is one of the two best assassin arcs.

On the yuri front, Hitsugi and Chitaru get appropriately cast as Romeo and Juliet in their school's play, and Hitsugi is very obviously into Chitaru while Chitaru doesn't get it yet. Haruki spells out Haru and Tokaku's similarity to Romeo and Juliet to Tokaku, and Tokaku is only annoyed because she strongly values free will and doesn't see herself as someone bound by fate. Those values are going to be a huuuuge source of angst for her later. This bit of foreshadowing wasn't in the anime, and I think makes for better plotting.

This volume is the meat of the story kicking in. We get the same pluses compared to the anime as volume 1, with the additional plus of the foreshadowing mentioned above, some new pluses and minuses from Otoya's arc, and Kaminaga's still a lame character. Another plus compared to the anime is the fight scenes here aren't hampered by budget.

If you like the Akuma no Riddle anime to this point, you will probably like this volume. If you haven't seen the anime, it's still silly, fight-y, yuri-ish entertainment, with continued finger-crossing from me that its ending won't suck.

Yuri Kuma Arashi: AGH. Most recent episode, AUGH. Best of the season so far, but AUGH. My girlfriend and I are sad about the most recent episode's ending because we really liked you-know-what-I-mean-if-you-are-watching, like anyone else with a soul.

Yona of the Dawn: Still a compelling fantasy-adventure. Also almost over, ugh. I know there's a lot more manga material, so even though I can just read the manga for more (and I plan to read it regardless), second season, please.

Maria the Virgin Witch: Also compelling fantasy. I'm scared for Maria right now despite the most recent episode's Disney-like happy resolution for [spoiler], since [spoiler] is such a sociopath. One more episode, ugh.

Death Parade: Jesus Christ, why didn't I try this show sooner? I hadn't started it at all before this past Saturday, and I finished catching up Sunday. (Being stuck at home sick helped, but still.) If you like Jigoku Shoujo, you will probably enjoy this show, too. I described it to a friend who also just got into it as a great mixture of sweet and soul-crushing tragedy. lol

Go! Princess Precure: Still pretty much the same pluses and minuses as initially, just with a new magical girl.

I still need to try Shirobako, since everyone and their grandma loves it, and I need to try Rolling Girls, since it seems like it could be fun.
Posted by Katherine Hanson at 3/24/2015