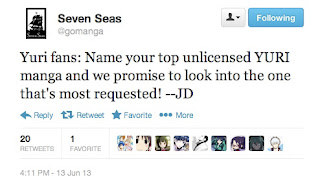 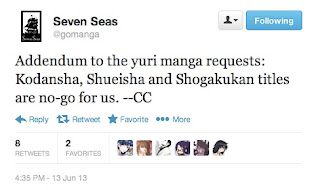 I'm sure there's something I missed, but those are all the relevant Kodansha, Shueisha and Shogakukan titles that are on English speaking yuri fans' radars.

I asked the guy representing Kodansha USA at Anime Boston about Octave (I tweeted from the Kodansha USA panel and @angelx03 thought to tweet me to ask about it), and he looked intrigued when I described it and said he would take a look at it, so fingers crossed. (And psst, maybe politely let Kodansha USA know that you're interested in Octave too! Nothing to lose from doing that, right? Here are their Twitter and Facebook accounts.)

Also, awesome, Kisses, Sighs, and Cherry Blossom Pink must be selling well if Seven Seas is asking about which yuri title they should look into licensing next. There are a bunch of titles I would love to see in English, so even if one I voted on isn't chosen, I'll probably still be happy with what they choose next. I cheated and voted for Shimura Takako's Aoi Hana and Morishima Akiko's Hanjuku Joshi. I hold both titles near and dear to my heart.

The reasons for my choosing Aoi Hana are, I hope, obvious. And why Hanjuku Joshi out of all of Morishima's wonderful oeuvre? As a two volume story, not just a series of one-shots, it's probably the best title for them to publish first by Morishima- although I'm not sure how much its sexual content- i.e. the need to shrinkwrap and be like "Don't read this if you're under 18!"- would limit its sales (not that I wouldn't be perfectly fine with being proven wrong), even though I would have loved the hell out of it in high school too. Minamoto Hisanari's Fu~fu would be my next pick. Hayashiya Shizuru's Strawberry Shake Sweet may be a bit too old at this point, much as I love it to pieces too (Tachibana Julia is my hero), and Nishi Uko's Collectors and Yamaji Ebine's yuri titles don't seem like they really fit Seven Seas' catalogue regardless of age, awesome though they are. Takemiya Jin's Omoi no Kakera would, imho, be a great choice for Seven Seas after it ends, since it shouldn't be very long and has growing buzz among English-speaking yuri fans. But again, there are plenty of other titles I'd be happy with too.

So yes- there are a load of titles you can vote for, so vote! You can not only let them know what you want on Twitter, you can let them know on their Facebook page.
Posted by Katherine Hanson at 6/13/2013 6 comments 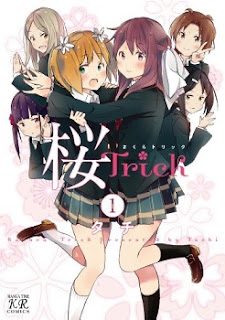 Yay! The Manga Time magazines have printed a boatload of yuri-ish series (pretty much every slice-of-life 4-koma about a bunch of high school girls), but I didn't know Manga Time Kirara Miracle! had a series about an actual couple! And apparently they get together in the first chapter! And there are two volumes out so far! And yeah, I haven't read this, but I'm excited! It could suck, but it could be good! And we haven't had a series about a yuri couple since Sasameki Koto in 2009! And holy crap, I am totally getting Sakura Trick asap just to see what I should expect here.

Sakura Trick is about two best friends who start high school and find themselves assigned to sit far away from each other in their classroom. As they start spending time with new friends, they fear drifting apart and kiss to have something that only they share. Apparently they really like that kiss, because "their relationship deepens" from there, i.e. they become girlfriends. Did I mention that I'm happy about this?

Even if this series isn't good, it's still great to see something like this greenlit, since, if it's successful, it'll encourage anime adaptations of other yuri-centric series. We've had an uptick in canon yuri characters- including couples- lately in series that have done well- like Mouretsu Pirates (couple, plus subtext between others), Horizon in the Middle of Nowhere (couple), Psycho-Pass (couple, plus two characters who appear more briefly and arguably another), Jormungand (one character, arguably more), Symphogear (two characters, arguably more), Yuru Yuri (even though it bored me, yeah, pretty much the entire cast here), Railgun (season 2, but still; one character, arguably another too), and Attack on Titan (one character who gets a bigger role later on and may actually get together with the girl she loves *fingers crossed hard that they do and that they don't die*)- and now this! I don't necessarily like all of the characters or series I listed, but I'm still glad for the variety they bring. Here's looking forward to Sakura Trick, and here's hoping it brings something entertaining to the table.
Posted by Katherine Hanson at 6/13/2013 4 comments 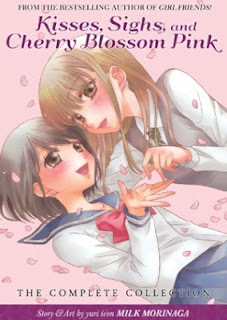 You know the movie romance trope in which the protagonist spots their love in a crowded room, and everything else- aurally, visually- melts away? That was my experience when I encountered a stack of copies of Seven Seas' release of Morinaga Milk's Kisses, Sighs, and Cherry Blossom Pink Complete Collection at Anime Boston even though its release date is today. I was with three other bloggers and we each bought a copy. Few English-language manga releases have made me as happy to read as this one.

As with Girl Friends omnibus 1, the Kisses omnibus is marketed on Amazon and Barnes & Noble's website with a tagline selling the "forbidden-ness" of the gay aspect of its protagonists' relationship, but thankfully, the actual books- and their descriptions on Seven Seas' website, as well as on Right Stuf's website (not sure about other retailers')- don't have that.

It's Seven Seas, so the translation is strong, as expected. It's a good quality release all-around, collecting the Kisses chapters that ran in Yuri Hime magazine as well as the new ones from Comic High! in the order in which Comic High!'s publisher Futabasha re-published them last year. I reviewed both volumes of Futabasha's release of this series fairly recently, here and here, so look there if you want an in-depth look at Kisses' contents. I also reviewed the original Kisses tankoubon published by Yuri Hime's publisher, Ichijinsha, making the original Kisses chapters the most re-reviewed (and re-bought) thing I've written about here.

It was funny to start reading this book and remember how, until not too long ago, I wasn't sure I would see the Yuri Hime Kisses tankoubon in print again- I had no idea what Morinaga's rights to it vs Ichijinsha's were or how that would affect its status in out of print limbo. Delightfully, not only did Futabasha pick up all of the original Kisses stories, they ran them online and re-printed them, Morinaga drew five more chapters giving us a great send-off for Kisses' main couple, and here we have the entire thing being published in English. The planets really aligned for this series.

As with Morinaga's Girl Friends, I have read this collection multiple times. To add to my previous commentary about the new Nana and Hitomi chapters- despite the concern I expressed about part of Nana's rationale for not wanting Hitomi to strive to be "the man" in their relationship, I'm still glad Morinaga included some discussion of gender roles in gay relationships, especially given that a lot of straight people assume someone has to be "the man" in gay relationships, among other similarly presumptuous ideas about gender roles/expression in such relationships. Granted, there are folks in the lesbian community who make boneheaded gender role assumptions too- although like Hitomi, not necessarily for unsympathetic reasons (actually quite sympathetic in Hitomi's case)- hence the plausibility of Hitomi's behavior before Nana clears the air between them. Just to clarify, I'm not criticizing butches or butch-femme relationships- just, for example, folks who think that if you're butch, you must only do things traditionally considered masculine or always be "the strong one" or... well, you get the picture.

Anyway, if you liked Girl Friends or you're a yuri fan... you're probably waiting for your copy of this series to arrive. lol Like Girl Friends, Kisses, Sighs, and Cherry Blossom Pink is a favorite of mine, and I would recommend it to anyone who enjoys good love stories.