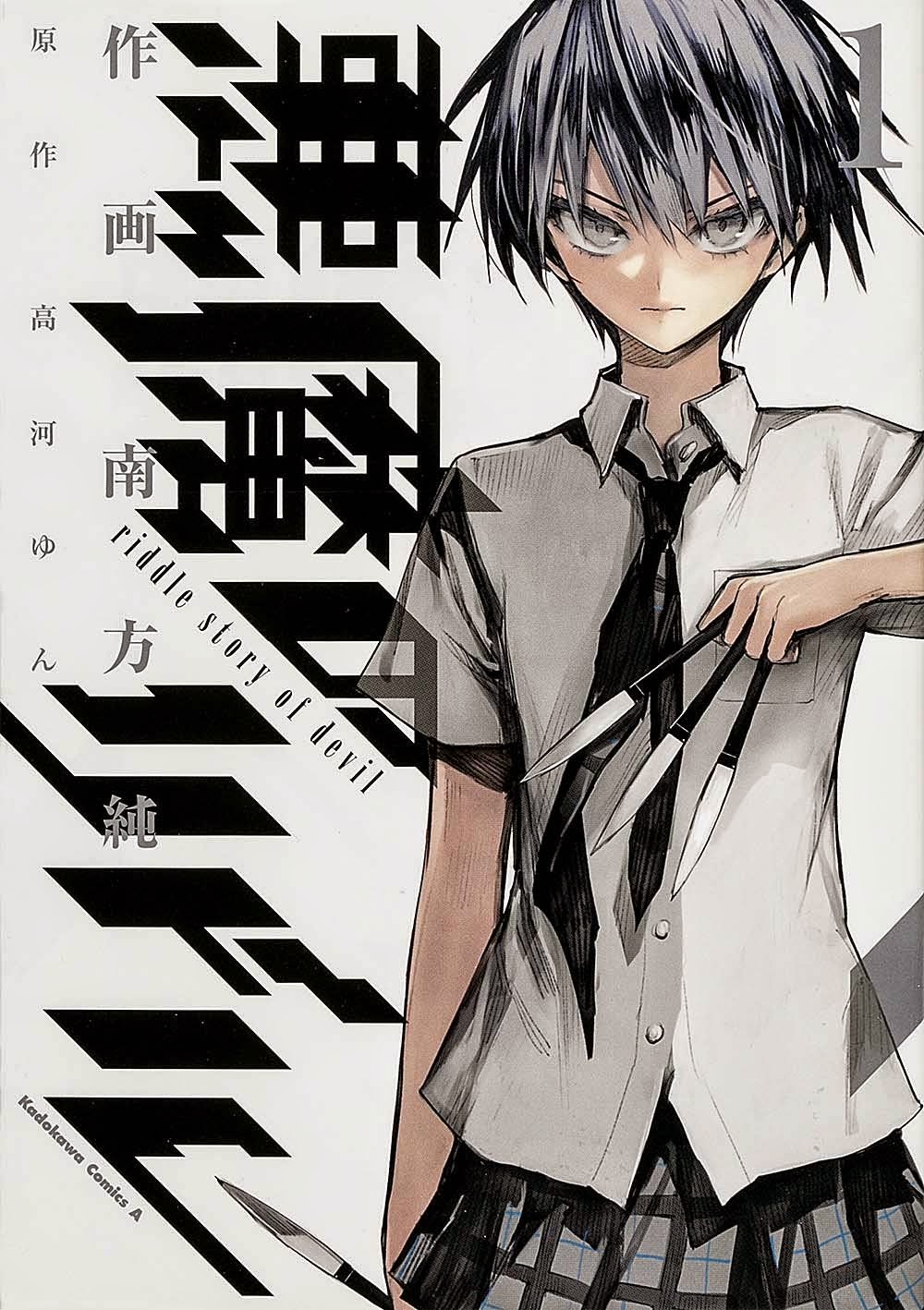 If you read my writing on the Akuma no Riddle anime, here, here, and here, you might remember that I started out apathetic, warmed up to it, then was irritated by its ending's hand-waviness and failure to deliver as much yuri as its marketing promised. The Akuma no Riddle manga, which is three volumes long so far and still running in Newtype, has been licensed by Seven Seas. Its first volume is due for release in English this October. I obviously can't vouch for how the manga will end, but so far, it's an improvement on the story we got from the anime.

Azuma Tokaku, our butchy lead, has mad assassin skills, but hasn't actually killed anyone. She is sent by the, uh, assassin school, where she is the top student, to Class Black, a class in a normal high school composed of twelve assassins and one target. Class Black's assassins quickly figure out who the target is: the only aggressively nice one out of all of them. After getting to know said target, who is conveniently a cute girl named Haru, Tokaku decides to defect to her side.

So... the manga really doesn't move as quickly as the anime, but I actually think it's for the better. It ends before Tokaku attends the meeting where all the assassins are briefed on the rules of how they can target Haru, which happens in episode 2 of the anime. The payoff is Tokaku, having just protected Haru from one of the assassins, Isuke, telling Haru she will protect her rather than carry out her assignment. This happens after a volume of their getting to know each other while their classmates get some characterization- Haru and Tokaku still get the lion's share, befitting their status as leads, but the side characters get more than they got at this point in the anime, which I appreciate. For example, at the tea party where Isuke tells Haru she has two dads, we get the flashback to how one of her dads adopted her after rescuing her from an abusive home, which provides some nuance to her character. When Chitaru and Hitsugi meet Haru and Tokaku, we also see how they met, which helps establish why they have the dynamic they do. I still enjoyed the bulk of the anime, but I like that the manga doesn't reserve development for every character who isn't Haru and Tokaku for their respective arc, shortly before they leave. The manga has the luxury of more room to breathe, without feeling slow.

The art does what it's supposed to. It isn't going to win any awards, but it's clean, consistent, and easy to follow. The anime adapted the manga's art style closely.

Yuri so far is Tokaku's obvious desire to protect and attraction to Haru that she has a hard time explaining, and the beginnings of the Hitsugi x Chitaru pairing.

Btw, most Japanophiles know "haru" means "spring", but the kanji for Haru's name is the kanji used for "to clear up" or "to be sunny", which fits given how she reminds Tokaku of sunny places. I'll add that if you're learning Japanese and looking for manga with a lot of furigana to practice reading, this series is an option if you want something aimed at an older audience than shoujo and shounen. The bonus pages don't have furigana, but the story does.

In short- this series still isn't high art, its premise is still ludicrous, but it's entertaining and better executed in this medium than in its animated form. Admittedly I benefit from knowing there's some calculated reason for Haru's friendly behavior (though she does genuinely like Tokaku) and she can defend herself better than she has in this volume, though this volume still indicates that there's more to her than people assume. It might be foolish of me to hope for this series to correct the flaws that most hurt the anime in my eyes, but I would love to see more titles that feature blatantly lady-loving female characters in a story that isn't strictly school romance or slice-of-life (which is one of my many reasons for enjoying Yuri Kuma Arashi), so here's hoping for better than what we got from the anime.
Posted by Katherine Hanson at 3/24/2015

I love that Haru somehow is the TOP STUDENT at her assassin school despite not having killed anyone. I would be expecting some sort of practical exam out of such a school, or some fieldwork, or something, that would've required she actually dispatch someone!

I'm looking forward to reading this. I, too, enjoyed the anime, although the final act revelation about Haru was absolutely infuriating. Luckily, it also didn't smell much like Yun Kouga, so the manga should hopefully avoid a similarly obnoxious development...

(Glad you hear that you're watching YKA, by the way - keep meaning to pick your brain about it.)

@Day- Ikr? Families all across the country send their daughters there thinking they'll receive a top-notch assassin education, and what do they get? Not a single assignment to add to their resumes when they enter the real world, for shame.

If you mean the Queen Bee thing... yeah, it looks like it's going to be in the manga also. Yuri shows up and makes reference to it in volume 2. Hopefully it'll be handled better here.

And yessss YKA, there is so much to unpack there. We should totally discuss it more.

Noooooo not the bee thing noooo =( Although I guess I'll reserve judgement until it comes to pass - Yun Kouga's a fairly adept writer, so I'm willing to give her benefit of the doubt...

Regarding YKA, won't be able to finish it until later today, but suffice to say I enjoyed it enough that I bought the limited edition of the first volume of the DVD release as well as the OP and ED singles even though my Japanese language skills are pretty poor.

Yeah, I'm keeping my fingers crossed for that also.

And I can't blame you! YKA was excellent, even before its awesome finale.