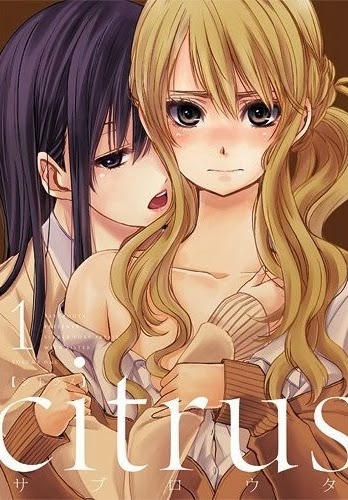 Saburouta’s Citrus manga, currently running inYuri Hime, is Seven Seas' latest yuri license. It is incredibly popular for a yuri title- its first print sold out immediately on Amazon JP and it was the most asked for yuri license for Seven Seas after they solicited requests.

If you followed yuri news when Seven Seas first released yuri in the US- their Strawberry line- you’ll know that the Strawberry line flopped partly because Seven Seas didn’t license any authors who had strong followings. Two of those titles, First Love Sisters and Voiceful, were Yuri Hime series. Voiceful is a standalone collection while First Love Sisters is three volumes but only saw one published in English. Yuri Hime’s publisher Ichijinsha was difficult to deal with then, so Seven Seas focused on other publishers when they tried licensing yuri manga again- starting with Morinaga Milk’s wonderful Girl Friends- to great success. I guess Ichijinsha is easier for them to license titles from now, because here we have Citrus.

For me, the big positive of Citrus being licensed is that it means there is some possibility of one of the popular Yuri Hime titles I like more- like Minamoto Hisanari's Fu~fu, or Morishima Akiko's work, especially now that her collaboration with Utena's creator Ikuhara Kunihiko is raising her profile- licensed by Seven Seas at some point. But after all this rambling, what is Citrus about?

Aihara Yuzu transfers to a girls' school right after her mom marries a guy she hasn’t met. Apparently mom is in the habit of marrying eccentric dudes, so Yuzu isn’t surprised when her mom is like, “Oh yeah, you won’t meet him for now because he’s traveling around the world!”

What does surprise Yuzu is learning that she also has a new stepsister, the quiet, rich, and (of course) dark and angsty student council president from her school. When Yuzu and Mei met as schoolmates, Yuzu butted heads with Mei over their school’s uptight rules but couldn’t help being somewhat attracted to her, and now that the plot is forcing them to live together, they keep butting heads while being attracted to each other.

More drama happens in the form of Mei having a dickish, gold-digging arranged fiancé who Yuzu exposes for what he is, Mei being fucked up because of her weird rich family, Mei’s grandfather (the chairman of her and Yuzu’s school) mistakenly getting the impression that Yuzu tried to come on to Mei before conveniently getting a heart attack that Yuzu saves him from, and Momokino, Mei’s childhood friend who is in love with her, catching Yuzu kissing Mei. Yuzu’s wingwoman is Harumin, the other gyaru at their school.

As an extra that didn't run in Yuri Hime, this volume includes a few light vignettes in which Yuzu fails at using Harumin's method for hiding a cellphone at school, a nameless student council member notes that Harumin and Momokino enjoy school more with Yuzu around, and Yuzu and Mei bond over fixing Yuzu's stuffed bear keychain, which Yuzu gives to Mei.

As I've commented to other people, I find it kind of fascinating that the editorial staff working on this title made Citrus' premise basically bend over backwards to make the we-have-to-live-together-because-our-parents-married aspect as un-icky as possible, while ickily playing it up as incest as much as possible.

Here are some photos from my copy to help illustrate: 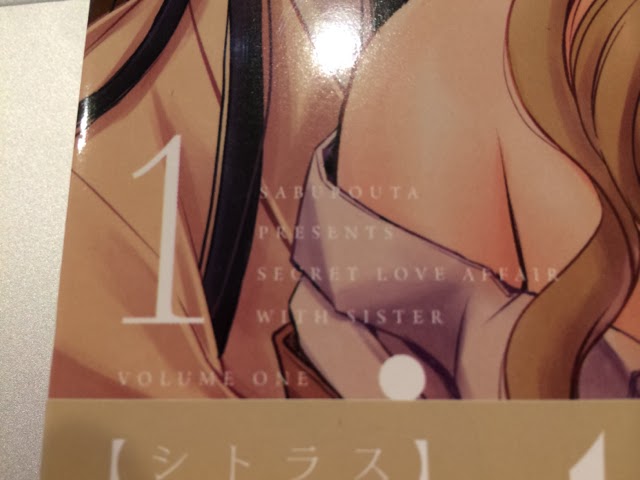 The tagline on the cover. 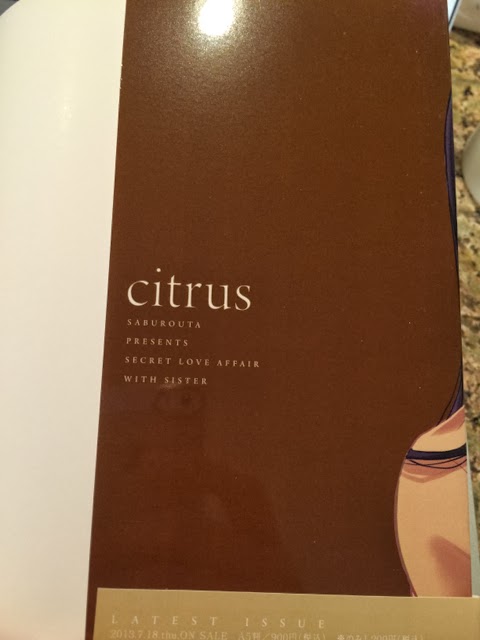 The first inside flap. 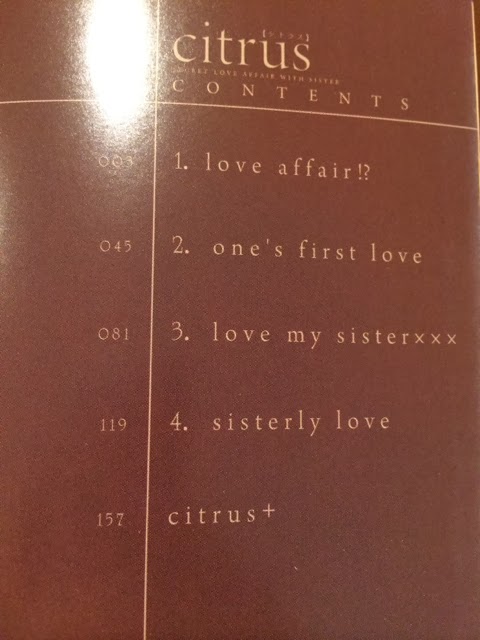 Two of the chapter titles. And it is tinier here, but citrus still has the "love affair with sister" tagline under it. 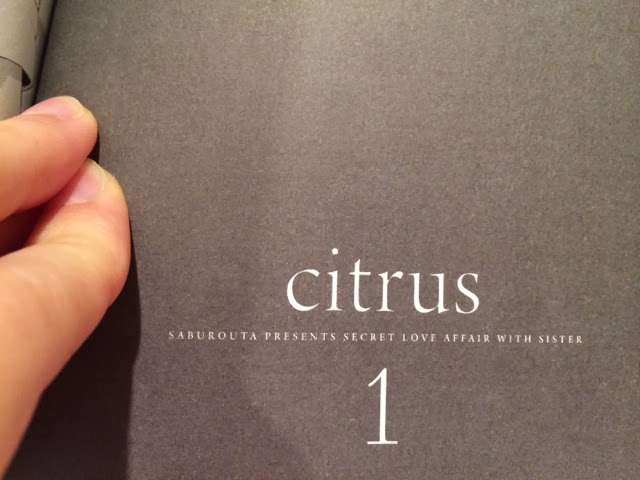 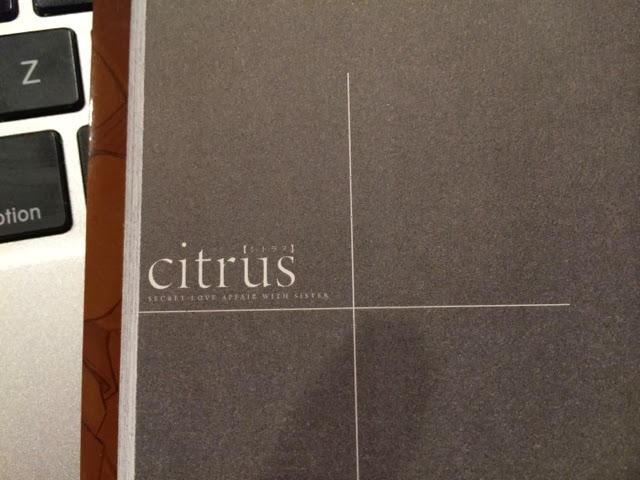 Every title page between chapters.

The premise is somewhat awkward, but it isn't any worse than, say, Marmalade Boy (at least the early volumes I read eons ago) or the Kiss Me/Kiss Myg movie. But then you have, say, the tagline and Yuzu reading a yuri manga about sisters while trying to figure out her feelings about Mei. This series has some decent aspects- like having an incredibly blunt gyaru as its lead, really nice art, and brisk story pacing. I just wonder how much of its popularity is attributable to that and how much is attributable to its sleazy presentation. (Cue people reading this getting defensive because they like it despite how it's played up even though I am not talking about them.)

For me, how well Citrus does published in English, like the Sakura Trick anime's success or failure, brings up this question: If they do well, will it lead to more yuri I like being licensed and adapted at some point, or will it only produce more yuri-centric manga licenses and TV anime that pander to tastes I find icky? Since both Citrus in English book form and the Sakura Trick adaptation are happening, I want to think the former will happen.

And if either one does poorly, would anime producers/manga licensors attribute that to their presentation instead of their genre? I'm not sure about that either (especially when it comes to Sakura Trick, since the Citrus license is riding the coattails of Morinaga Milk's success in English while Sakura Trick is the first yuri-centric TV anime in years), but I obviously would like it to be the former.
Posted by Katherine Hanson at 2/28/2014 2 comments 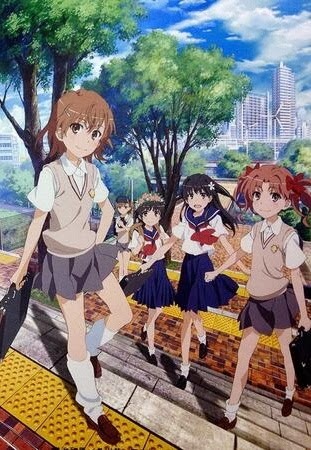 Season 2 of Railgun is a worthy follow-up to Railgun season 1, a combination of some of the strongest and weakest material in the franchise to date.

Those who watched season 1 (which aired in fall 2009- wow, over four years ago) may remember that Railgun takes place in Academy City, a city thirty years more technologically advanced than the rest of the world, built for the newly emergent espers who attend school there. Espers rank from Level 1 (weakest) to Level 5 (strongest), with non-psychics at Level 0.

There are seven Level 5 psychics, with Railgun's protagonist Mikoto as the third-highest ranked Level 5. Mikoto has the ability to create and manipulate electricity and is known as the Electromaster. Her roommate and best friend is Kuroko, a Level 4 teleporter who is part of Academy City's law enforcement agency, Judgement. Kuroko provides 95% of the yuri in this series by being in one-sided love with Mikoto. (The other 5% is a minor character who had feelings for Saten in season 1 and Saten's perving over Uiharu.) You also have their friend Uiharu, a computer whiz who is Kuroko's partner in Judgement and a Level 1 with the ability to keep things at a fixed temperature. Uiharu's roommate Saten rounds out the group as the one who doesn't have any special abilities or skills, but still does stuff- like getting key character's trust in the Silent Party arc.

Railgun's two biggest selling points are its thorough world-building and good characters who do cool things. This season further explores the seedy aspects of Academy City that season 1 touched on.

Its first episode is a relatively light transition between the Poltergeist arc of season 1 and the Sisters arc of this season, once again showing how well the characters gel and showcasing some cool teamwork between Mikoto and Kuroko when some terrorists take their friend Banri hostage.

The showcase of this series, though, is the Sisters arc, which spans episodes 2 through 16 and is the material this season adapted from the manga.

In the Sisters arc, Mikoto finds out about some government-sanctioned experiments involving clones of her that are so horrific- and in her view, so much her fault- that she doesn't tell her friends about them and tries to stop them on her own. This arc lessens the focus on Mikoto and her friends as a group, which was one of the charming things about season 1, but I still enjoyed it plenty because I like Mikoto and plot was briskly paced and intelligently-written- until its climactic episodes- with some of the slickest fights of the franchise.

As with the first season, this season's fights rely as much- if not more- on brains as brawn. Mikoto may be the third-highest Level 5, but she doesn't give herself any rest in her mission to shut down the experiments- because every day the experiments continue equals another girl/clone of her getting killed- so she's running on fumes for most of it, unlike her opponents- which include two other Level 5s. This results in her having to find ways to counter them without expending as much power as usual.

The anime version of this arc also improves on the manga's version of it by showing us her friends'- especially Kuroko's- perspective of what is happening. And like the first season with Kiyama, this season does a better job with Nunotaba- the prominent gray area morality scientist of the season. It resolves her character arc's loose ends later in the series instead of letting her fall off the face of the earth after she serves her purpose for the main story arc.

This season's biggest weakness is the Sisters arc's climactic episodes being hijacked by Touma, the utterly boring protagonist of A Certain Magical Index, the series Railgun is a spin-off of. I know the Sisters arc was originally part of Index, albeit entirely from Touma's point of view, but it didn't stop me from yearning for this arc's end after he became a major driving force in it- a 180 degree turn from my looking forward to each new episode. I knew what was coming because I've read the first six or so volumes of the Railgun manga, but it was still annoying and I couldn't help being like, "Shoo, go back to your own series." Touma's special ability has some underdog appeal, but the story uses it as a deus ex machina. I wish the original creator of this arc had come up with a better solution against Accelerator's near-invulnerability.

I really liked seeing how Mikoto applied what she learned in the Sisters arc (that you shouldn't shoulder hardships alone) to the Silent Party arc later, though. The Silent Party arc, in which Mikoto must save another kid created by science, starts a bit slow, unlike the Sisters arc, which took off sprinting. It is good once it picks up speed, though, and has a really strong ending. It made good use of the Railgun regulars and I liked how it showed Saten and Academy City's other Level 0s pitching in to save the day, not just the esper characters.

Despite the Sisters arc's resolution, the fact that Saten's signature gag hasn't died yet, and some of Kuroko's behavior (she's a mix of girl-who-is-very-cool-and-competent-and-earnest and caricaturishly-perverted-one-sided-service-crush; I commend this season for, like the first season, doing better with her than the manga, though), I enjoyed this season and appreciate how much work the team producing on it did to improve on the original.

Story: B+, aside from the irritating Touma-heavy episodes
Visuals: B+ Like the first season, some of J.C. Staff's best work.
Overall: B
Posted by Katherine Hanson at 2/09/2014 0 comments