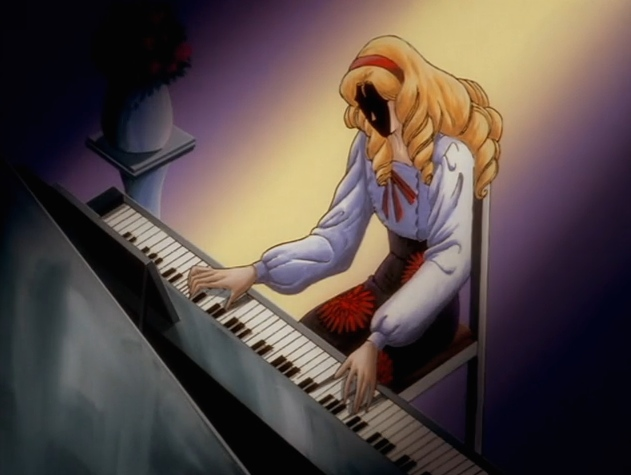 This episode opens with an upbeat ditty playing as Nanako and Tomoko browse dresses for Nanako to wear at the Sorority's post-midterms party on Fukiko's private ship. It's the last day of post-midterm holidays, and the next day, exam scores will be posted. Tomoko aims to be average. Nanako is concerned about her score (although still not as much as your average Sorority member), and Tomoko is like "You get good grades, you're good."

The next day, we soon see that Nanako and Mariko ranked in the top 50. Their celebration is cut short by a Sorority candidate named Nakaya Junko crying and running away because she ranked 73rd because she got too sick to write anything on the first day of exams. (Tomoko notes that's still better than what she got.) The Sorority being as compassionate and sensitive about its members' well-being as it is, you know Nakaya will be fine. 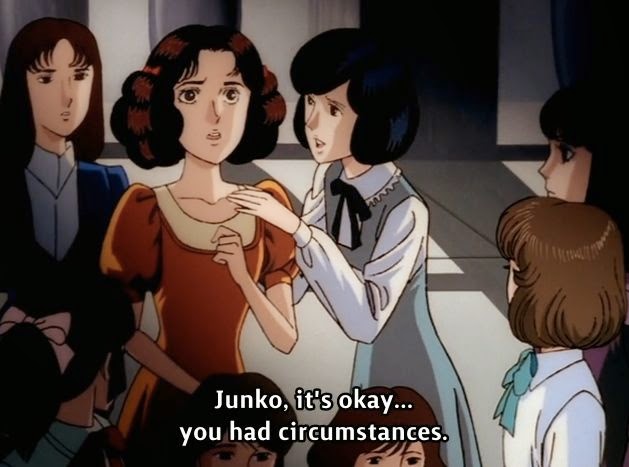 In English class, Nanako thinks about how it's been three months since she fell down the rabbit hole that is this school. She feels more settled, and like weird shit is less likely to happen at this point, hahahahahaha. 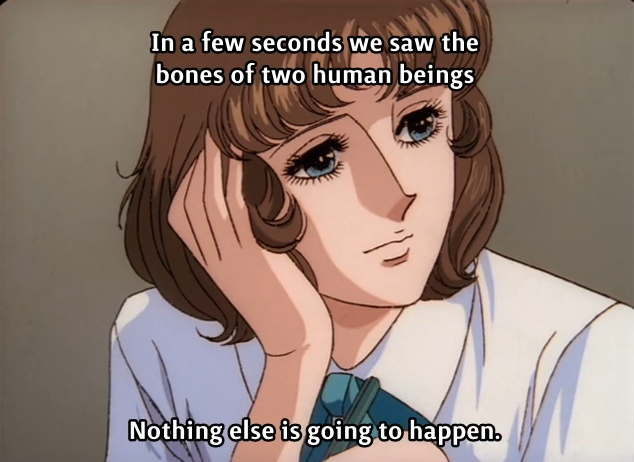 (Fyi, the subs at the top are from her teacher's English speech example. It didn't seem as weird before I read it after screencapping it.)

Nanako's perspective reconfirms that even though Seiran has enough architectural and pastoral beauty to make Marie Antoinette's Petit Trianon jealous, 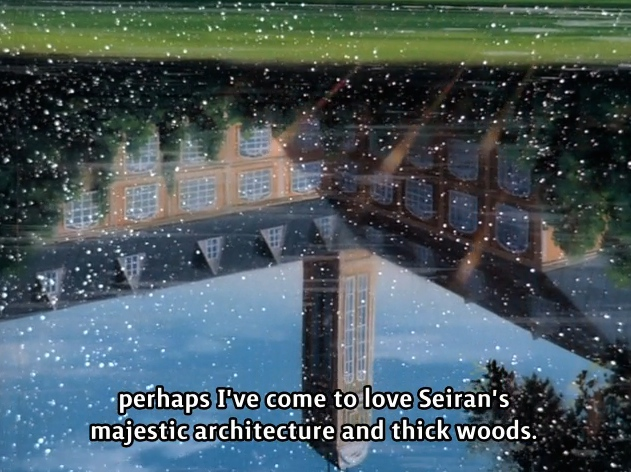 its ruling elite is pretty brutal. Like pretty much everyone at Seiran except Kaoru, Nanako didn't fully put together the implications of the Sorority's rules until she saw them used on someone. (I see what happens with Nakaya being for Nanako what seeing how a typical lower class family's life was like was for Rose of Versailles' Oscar. Obviously a starving family doesn't equal what happens to Nakaya on the horribleness scale, but I just think their respective effects on Oscar and Nanako's awareness of the shitty systemic aspects of the worlds they know, however different their scales, are similar enough to mention.)

At this point I mention the similarities between Oscar, Rei, and Claudine's character designs to my girlfriend Amy and tell her what I think their differences are. And then she pulls up this picture, this one, and this one, and proves that they are triplets. (Amy: "They're cosplaying as each other, basically.")

Anyway, Fukiko pulls a pretty cruel bait-and-switch. (Not sure it's intentional, since I'm not sure she is cognizant of how hurtful a good amount of her behavior is, despite her guilty hallucinations of Rei a couple episodes ago.) 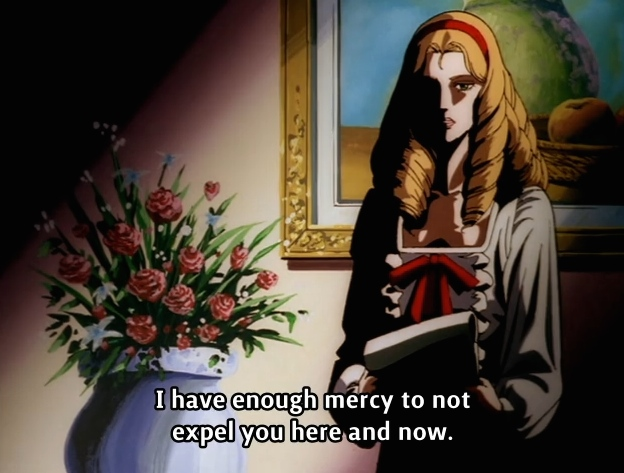 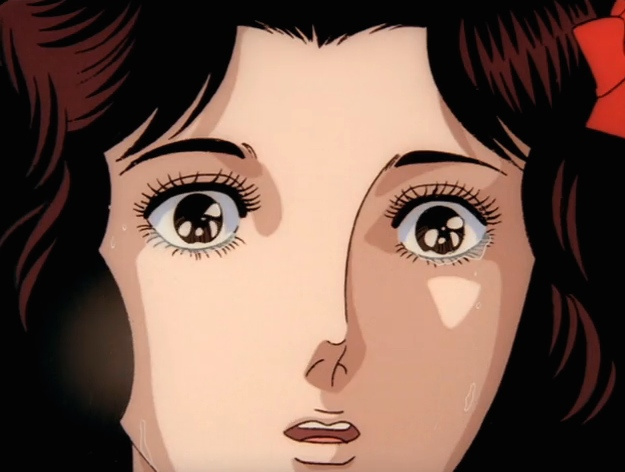 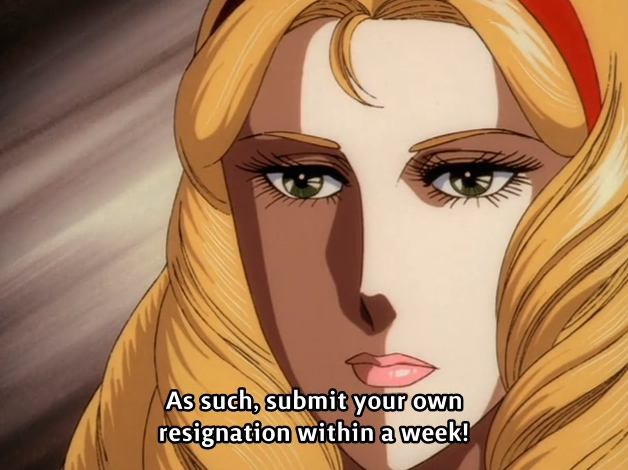 Since pleading with Fukiko alone doesn't work, Nakaya asks her two best friends to help her out, 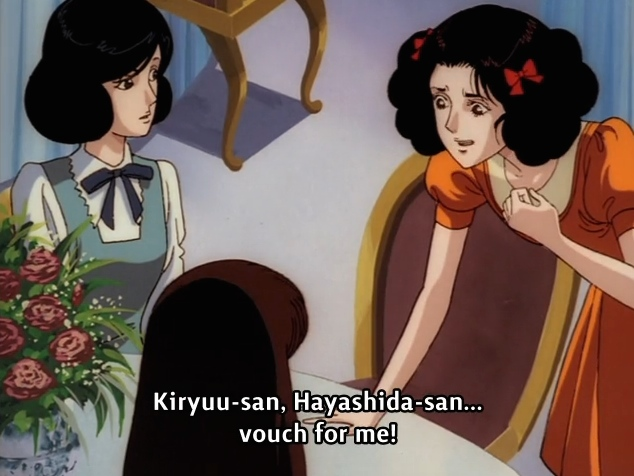 but they don't say anything on her behalf, which I think is loads worse than Fukiko's treatment of her.

Nanako stands up to vouch for Nakaya, though, and tells Fukiko she doesn't think the rules by which she's being judged are valid for good measure. I've seen Nanako criticized as a weak character, but lol she's the only one besides Kaoru vocally questioning Fukiko at their school for a good while in this show. (It reminds me a little of Akane from Psycho-Pass being called weak early on in the show even though she acts on what she thinks is right contrary to the shitty system that controls her world from episode 1 on. She does act in ways you would expect of a rookie cop, like Nanako acts in ways you would expect of a 15 year-old freshman. They both show poor judgment at points, but neither of them is weak.)

Fukiko ends the discussion by being like "Who do you think you owe your Sorority membership to?", leaving Nanako in shock because it confirms the rumors that she didn't get in fairly that she didn't think were true, because they were predicated on her being complicit in getting in unfairly. Mariko gives her the obligatory "OMG don't ever oppose Fukiko, what was that" speech and tells her to apologize to Fukiko with a big bouquet of red roses.

But first we see Nakaya asking two of her Oneesama, drinking tea and smoking in their private waterfront clubhouse(?) for help. Obviously that doesn't work. 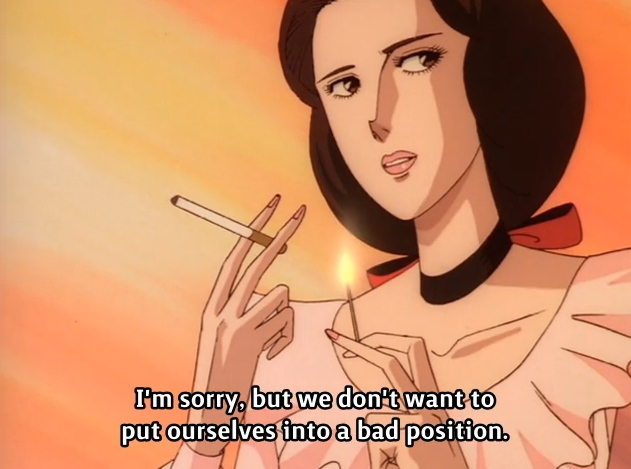 When I first watched this episode, I thought Mariko was being melodramatic as usual with her red rose suggestion- not that this was an established custom for people begging pardon from Fukiko- until this scene. 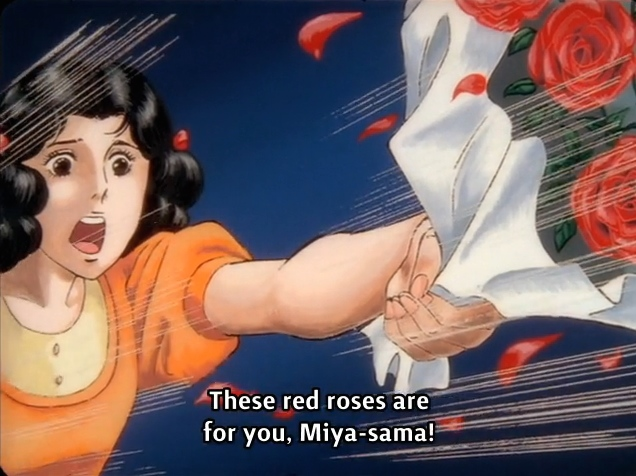 In case we can't tell that Fukiko is being mean, we see her face ominously shadowed as she plays the same piano tune she always plays.

We see the party on Fukiko's private ship the next day, where Nanako can't enjoy herself. Mariko tries to cheer her up (and get her to apologize to Fukiko if she hasn't), but Nanako is just disturbed by how Nakaya could be kicked out just because Fukiko wants it, and how her admittance might have happened the same way.

Fukiko breaks out the champagne, and the party continues at her beachside mansion. Nanako steps outside, and Fukiko follows with her face completely blacked out, which has only happened so far in creepy scenes- and only with Fukiko, aside from Rei when she was high and thought Nanako was Fukiko in the previous episode. 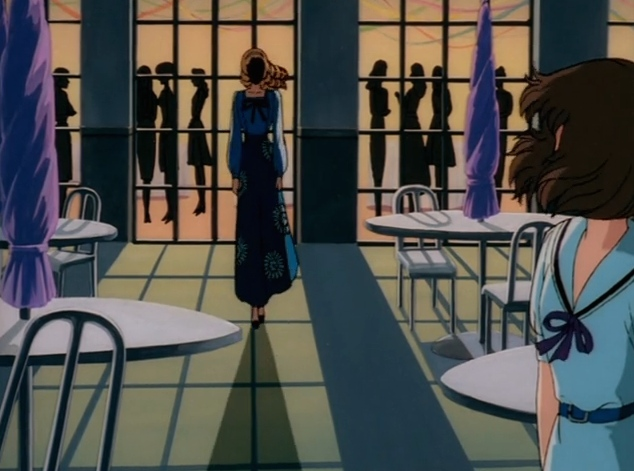 Fukiko suddenly wants to be reconciliatory, 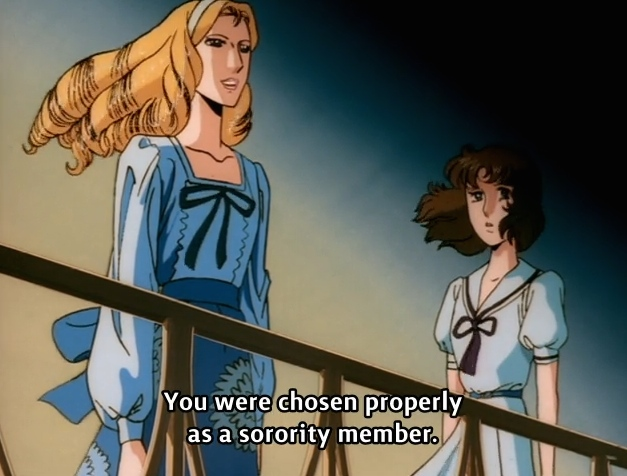 and her apology turns into an "apology." 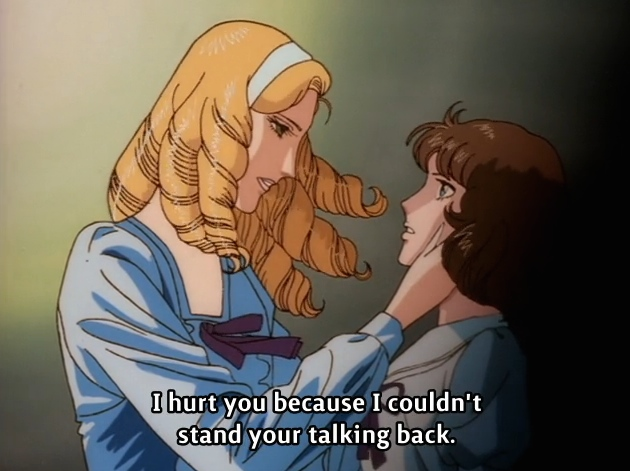 The bird motif seems to be replaced by moths in this episode. I guess the director wanted to switch it up a bit. 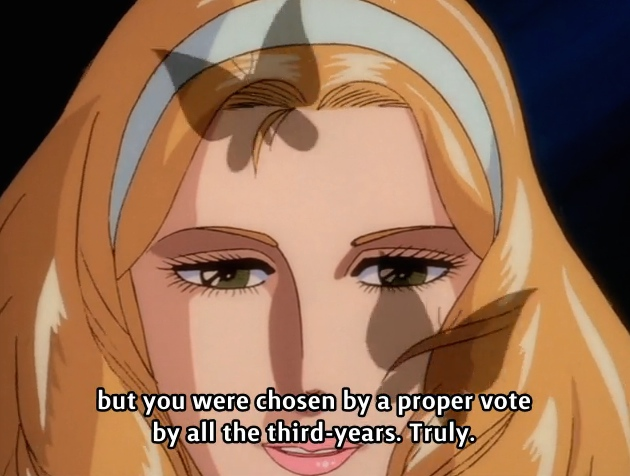 After Nanako accepts her apology, Fukiko hugs her, and this apology gets weirder. 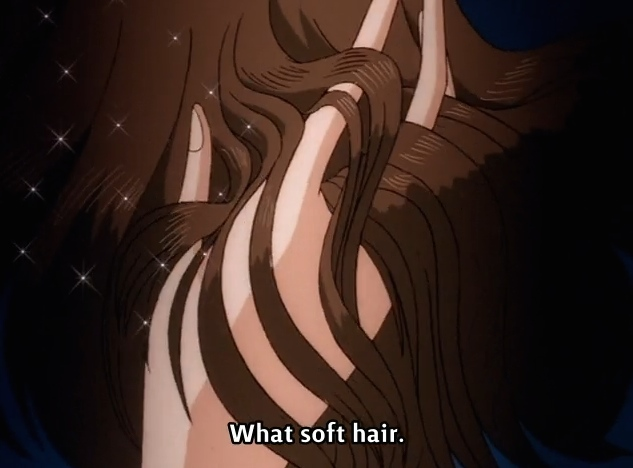 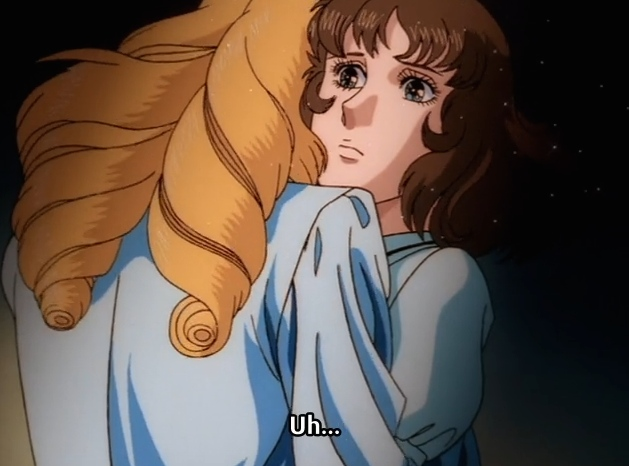 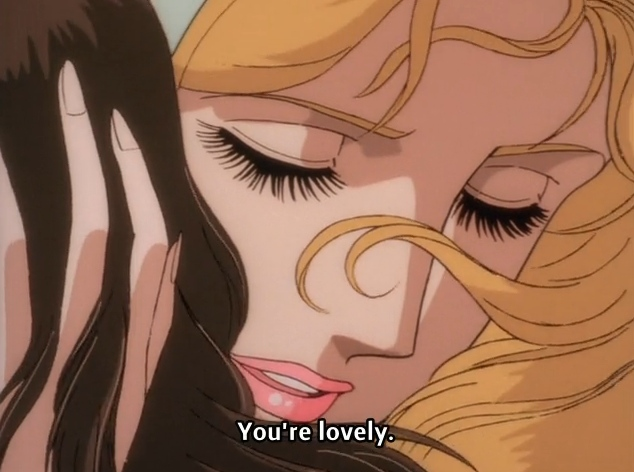 They walk along the water, and Nanako notes Fukiko's physical similarities to Rei. She also feels that Fukiko hates her life like Rei, although she doesn't know why.

Fukiko also somehow knows about Nanako exchanging letters with Takehiko. She presses a promise to stop writing to him out of Nanako, but Nanako intends to keep writing to him, and how would Fukiko find out anyway. (Nanako isn't thinking this through too well, because why wouldn't it be possible for Fukiko to find out it was continuing if she found out about it in the first place? That's some powerful wishful thinking.)

Nanako and Tomoko talk on the phone later, but it's interrupted by a call from Nakaya, who is waiting at a pay phone nearby.

Nakaya tells Nanako about how she's looked up to the Sorority since she was a kid, assuming its members would have the character to justify the prestige and glamour associated with them. Now she realizes it isn't true, and that looking back, she hasn't had a single happy moment as a member of the Sorority. Nanako is shocked because what Nakaya is saying is how she feels but hasn't articulated, and she isn't alone.

Nakaya admits she had a grudge against Nanako for Fukiko's favor towards her, but now sees that she misjudged her. 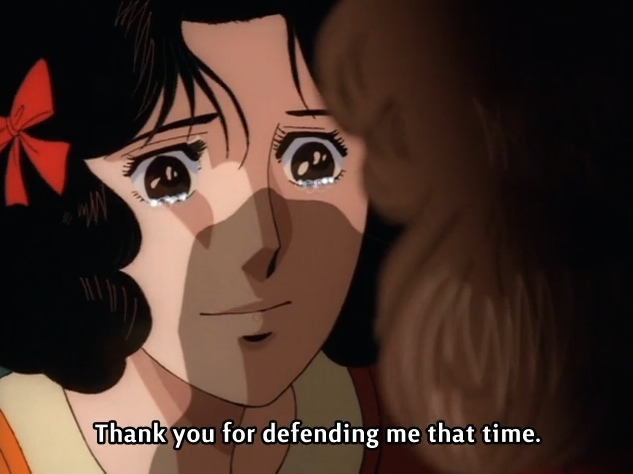 In a nice parallel to the obligatory red rose apology bouquet from earlier, she gives Nanako a single white flower, because she wants to. 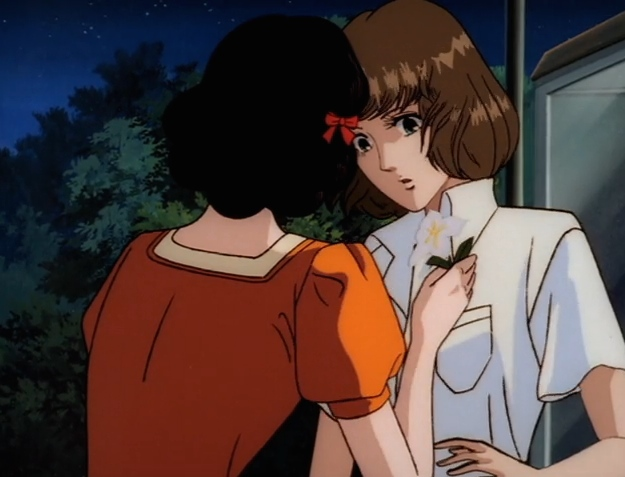 Nakaya tells Nanako she won't ever forget what she did and leaves. Nanako admits what she thinks of the Sorority also, 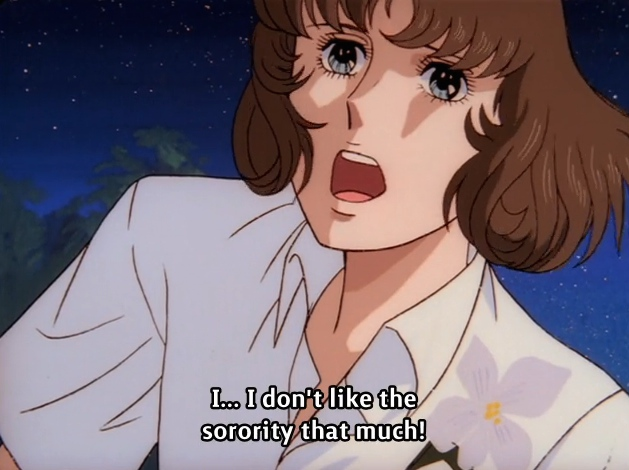 and even though this is another bittersweet episode, I think Nanako's disillusionment is more sweet than bitter. 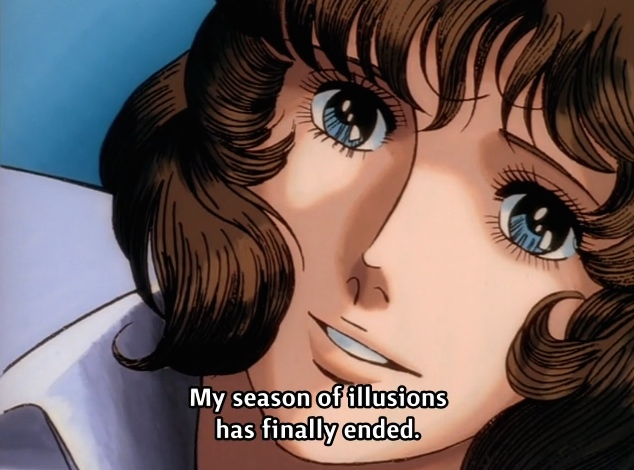 The next episode will feature Kaoru's basketball comeback, and conflict involving her illness and Mariko.
Posted by Katherine Hanson at 8/10/2014 0 comments 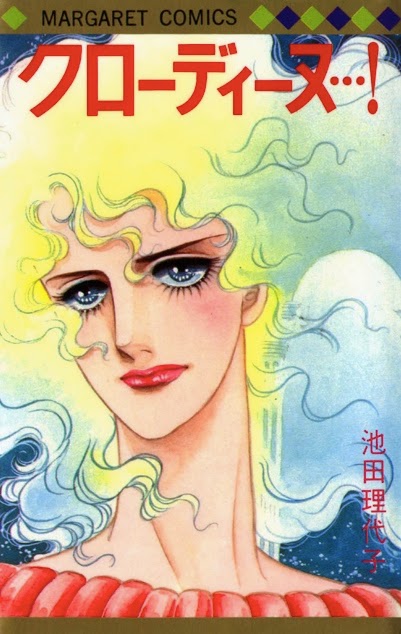 So a commenter left a comment on my review of Paros no Ken volume 1 rightly critiquing my initial written interpretation of the titular character of Ikeda Riyoko's Claudine...! for finding Claudine's gender identity somewhat ambiguous instead of "this character is a trans man." They also made a good argument for Paros no Ken's Erminia being read as a trans man. Because they brought up some great discussion points, I wound up practically writing an essay in response to it, and I think those discussion points are worth a blog post instead of being hidden in the comments of an old review.

The primary point of the comment was- why my interpretation of Claudine and Paros no Ken's protagonist Erminia as having some ambiguity to their gender identities?

In response to that, I wrote:

I am much more sure that Claudine is a trans man than I was when I first reviewed it years ago. As you read in my writing about Paros no Ken, it's harder to determine bona fide trans men in old manga because the folks writing older lgbtq stuff didn't have a lesbian lingo vocabulary (or couldn't use it) and somewhat clumsily described some characters (like Oniisama E's Rei and Sailor Moon's Haruka) as having "the aura of a man" (this being in the text of Oniisama E) or "the heart of a man" (which the creator of Sailor Moon said before clarifying that she did intend to write two girls who were a couple.)

I hesitate to definitively call Erminia a trans man (although there are definitely grounds for that interpretation) because of the broader context of the time, and the fact that whether Erminia is "both a man and a woman" or "neither a man nor a woman" is a major plot point in PnK. Regarding Claudine, when I first reviewed it, I was looking too much at historical context and not enough at how Ikeda Riyoko went the extra mile to make it more trans-specific than the other examples I mentioned in my discussion of trans straight male vs cis gay female identity in old manga. I will add a note to my review of Claudine...! about that.

In response to the points that "even in clearly trans stories like Hourou Musuko the mangaka have missed the importance of the chosen name. Since Nitori is a girl, the title should have been Wandering Girl and not 'Son'. (The same goes for Claudine and Paros no Ken's Erminia :/)", I wrote:

Re chosen names, yeah, Hourou Musume would better reflect Nitori's gender- ditto with Claudine...! being changed, although it's better there imo because Claudine himself didn't mention wanting a different/true name, like Nitori did. In the cases of Claudine and Erminia both not saying they wanted different names, I'm also pretty lenient because Claudine lived in the early 20th century and subsequently didn't seem to know what being "transsexual" is and how it applied to him until right before the end of the book, and Erminia (assuming the trans reading to be the right one) lived in some kind of Medieval kingdom. I'm reminded a little of how at the women's college I attended from 2008-2012, there were some trans men who didn't realize they were trans before they started school and were exposed to the queer awareness on campus, causing them to realize what they were and start publicly identifying as such- that's my reading of what went on for Claudine until the doctor told him what being transsexual is and what might be going on with Erminia. I realize that I am not the best judge and could be wrong about something, though. Anyway, that is the end of my long rambling!
Posted by Katherine Hanson at 8/01/2014 0 comments