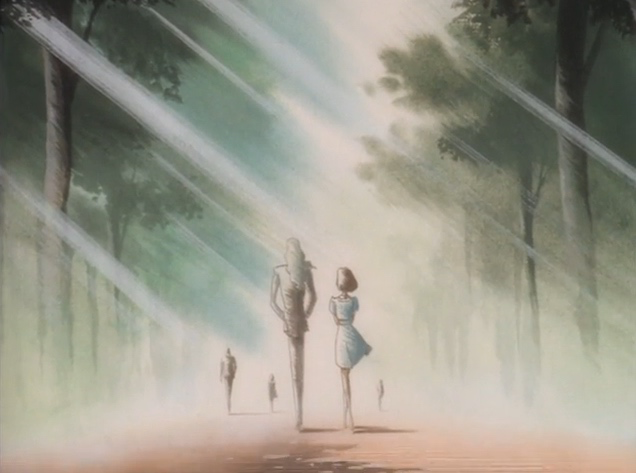 This is the episode in which Nanako gets high, partly explaining the episode title "Into the Dream", and confesses her feelings to Rei. I guess that's one way to resolve a character hesitating to confess.

Nanako almost forgets she doesn't need to wait for Tomoko for a morning commute, because she has her head in the clouds over Rei. She helpfully recaps how amazing and hot and gorgeous Rei was playing basketball and how Mariko has a crush on Kaoru, before the bus lurches like it did when she first met Rei and she spies Rei reading in the back. Because the bus driver is a dick, the bus pulls away before she can get off even though she's lurching against the door right when it closes. 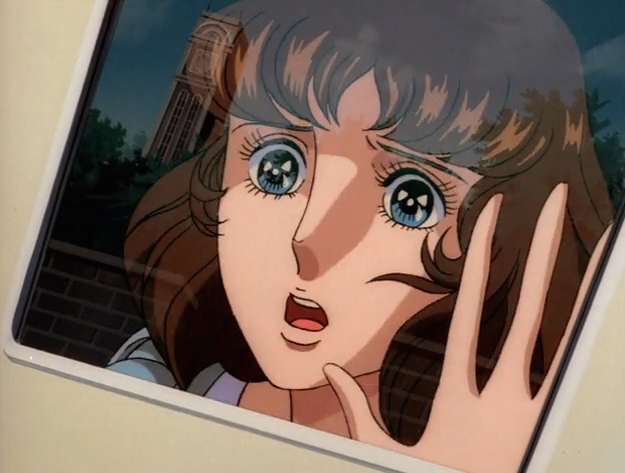 Rei is pretty chill about missing her stop, though, and invites Nanako to play hooky with her.

We get our obligatory shot of Mariko worrying about Nanako's absence in class, before we see Nanako and Rei put their school things in a locker. 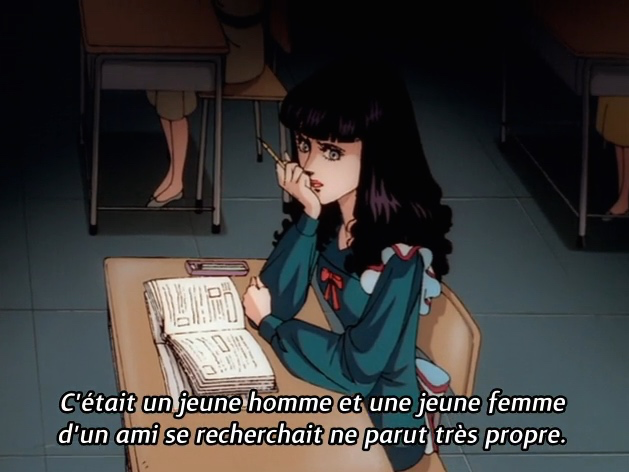 even though for all she knows, Nanako could be sick since this is before the days when people could send texts. If this show took place today, Mariko's texting would probably have made Nanako's patience with her run out well before the birthday party.

Rei and Nanako walk through a park, Nanako being jittery about the possibility of people knowing they're cutting class, yet still elated to be doing it with her crush. Rei leaves to buy lunch, a truancy officer comes up to Nanako being suspicious, and Rei gets them out of the situation through a lie in which she feels compelled to explain that Nanako is from a village where you can see mountain boars. (I guess "We're college students" is too common of an excuse.) She's obviously a pro at this, to the point that she cooly lights a cigarette in front of the officer. Moments like this are the bread and butter of Rei's fandom. 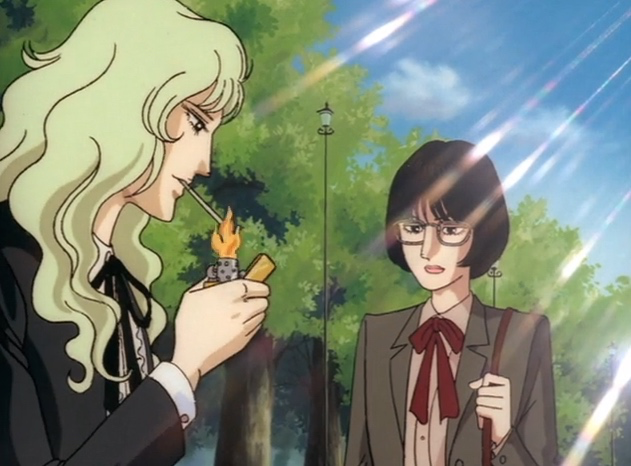 And the show sort of lampshades that the non-freshman teenagers in this show look like the animated version of older actresses playing teenagers. "It's shocking that Katherine prefers this approach to character designs over the current baby-face trend" said no one ever. 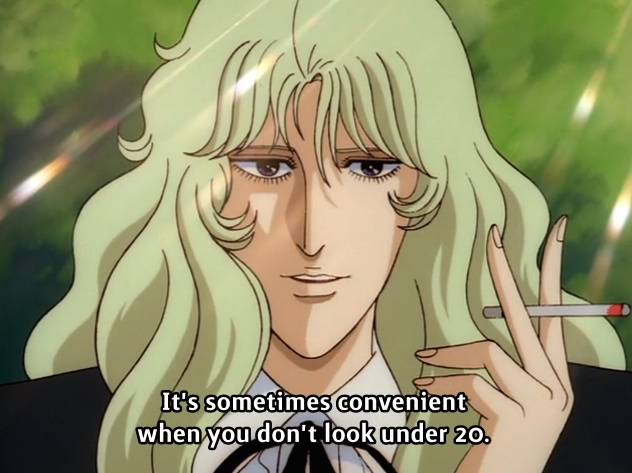 Rei lols about that as well as the officer obliviously assuming she's a dude instead of a super-butchy chick.

She drops her cigarette and apologizes when she sees that Nanako was a lot more shaken by the encounter with the officer than she was, though.

Back at school, Kaoru raises Mariko's spirits by inviting her to her basketball practice, so that settles that.

Rei and Nanako have some banter in which Nanako learns Rei skips a lot and chides her for her ridiculous lie before panicking on seeing Takehiko and his friend in that same park. Surprisingly, Nanako doesn't try to hide in any way, just coolly walks by Takehiko and exchanges glances with him, before he's like "Oh, hey!" He invites her to attend his college's festival and asks if she's on holiday, causing his friend to be like "REI, SHE'S OBVIOUSLY SKIPPING BECAUSE OF YOU." You know Rei is agitated because she's chewing a twig. 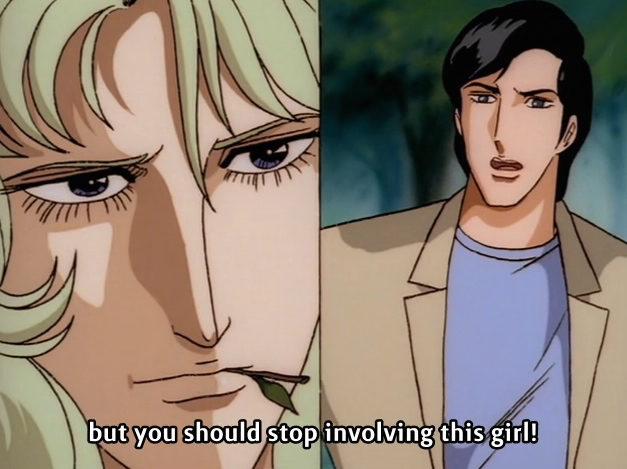 Rei sarcastically bows and reveals that he's her brother. Rei is Oniisama E's version of Rumplestiltskin from (the shittiness that is) Once Upon A Time- everyone's related to her.

Taking advantage of the awkward pause of the moment, Rei takes Nanako's hand and runs away from her brother and Takehiko.

Nanako stops her and get some exposition from her, and guesses why her surname isn't Ichinomiya like her two siblings. All will be confirmed in good time, Nanako. In a "subtle" bit of symbolism, we see three ducklings trailing their shared mother, all in one unified family. 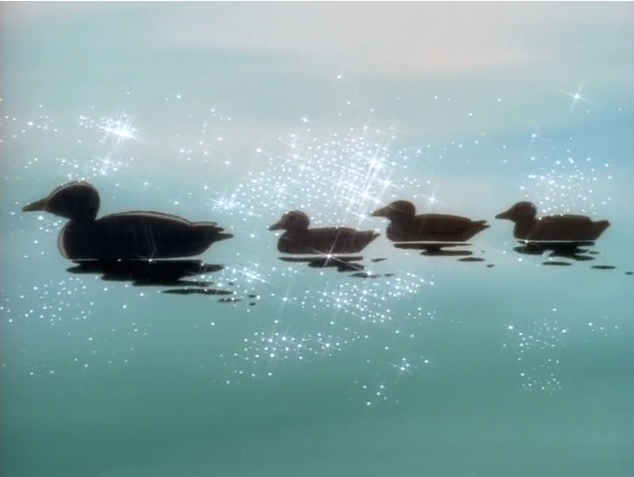 Nanako takes a bite of her sandwich and notices that it's old and gross, but Rei didn't notice because she's used to eating the godawful expired food she peckishly eats from her fridge. Rei compares the significance of human life to an ant's life, and it's obvious she's talking more about herself than people in general.

Ah, nope, Mariko's still very worried, and consults with Tomoko, who figures Nanako just might be sick like most people would. Mariko has the comfort of lunch planned with Kaoru along with the basketball practice. 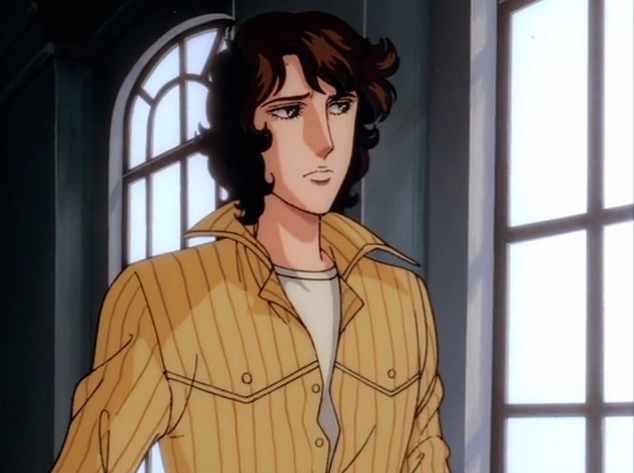 because Rei can apparently do nothing without their noting it and praising her as a free spirit.

Nanako enjoys her alone time spent in a lovely park with her choice for loveliest lady, 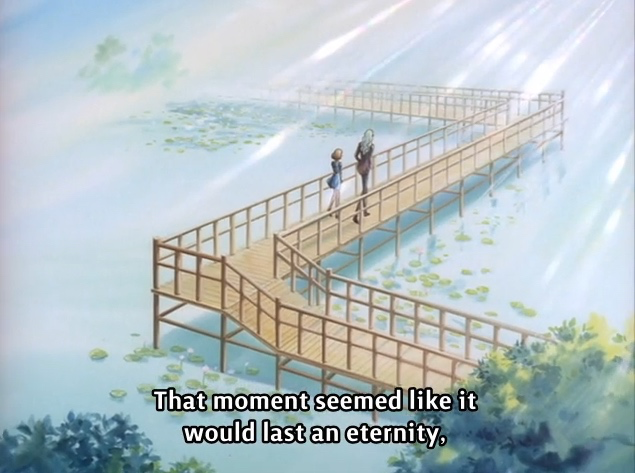 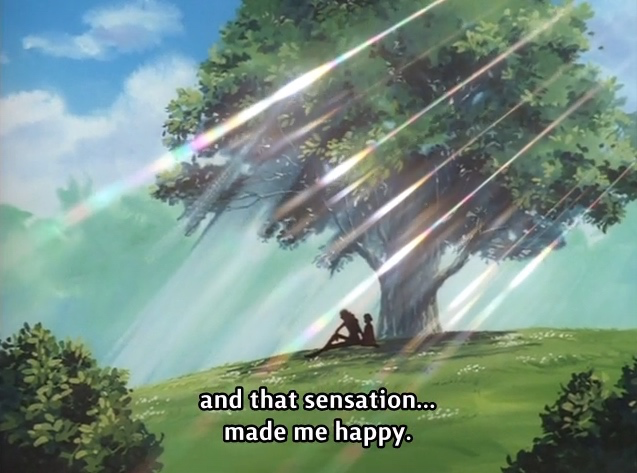 and they rest beneath a tree, where Rei lights another cigarette.

Being a true queerio, Nanako processes the implications of Rei saying "Ma chérie la poupée" and where to go from there, 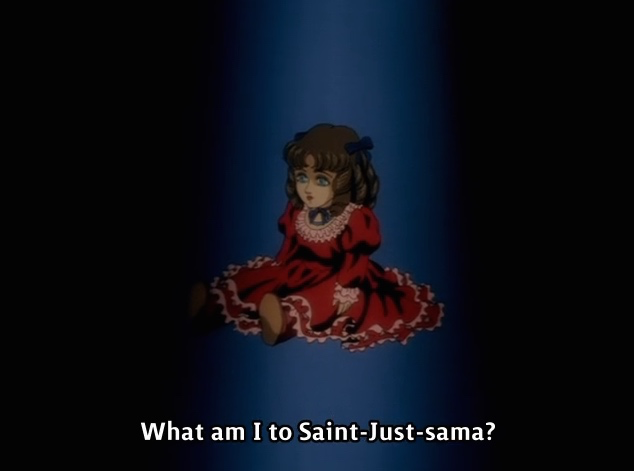 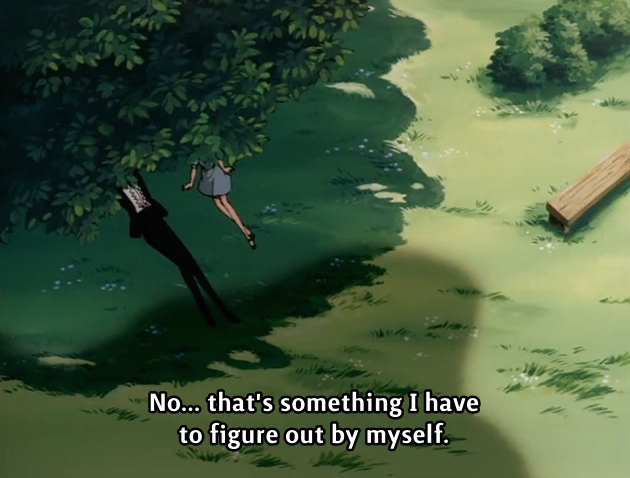 but doesn't forget to enjoy the moment. 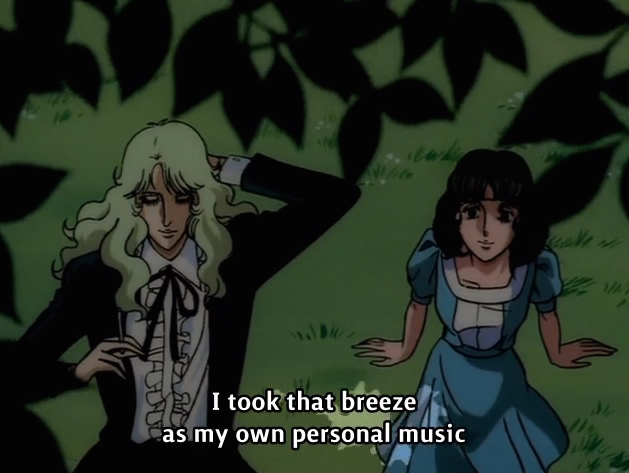 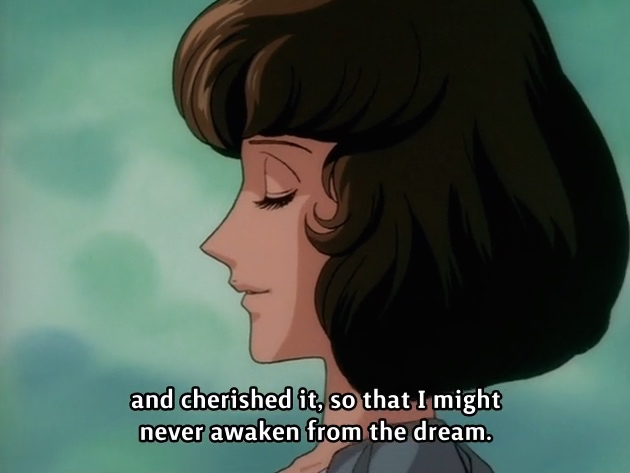 The opening theme's Cinderella imagery seems especially created with scenes like this in mind.

Rei mentions that one of her fans wants her cigarette butts so she can smoke them later, so Nanako (mentally noting that she tried to use one of Rei's butts for that) asks if she can try the cigarette she's smoking. Rei expects it to be too much for her, but she insists, so Rei suddenly acts like a Disney villain, being like "Ohoho, you want to smoke a cigarette, eh? *mustache swirl* We'll see if you can handle it."

And, uh, this happens from Nanako's perspective. 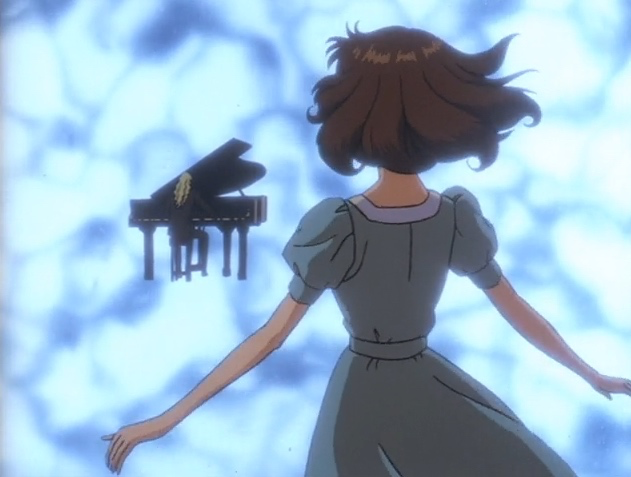 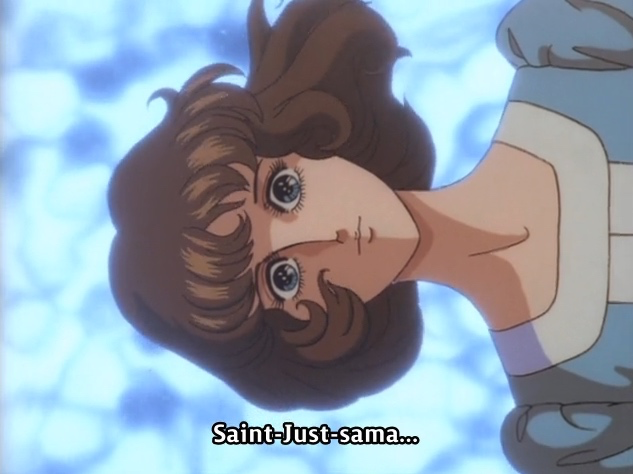 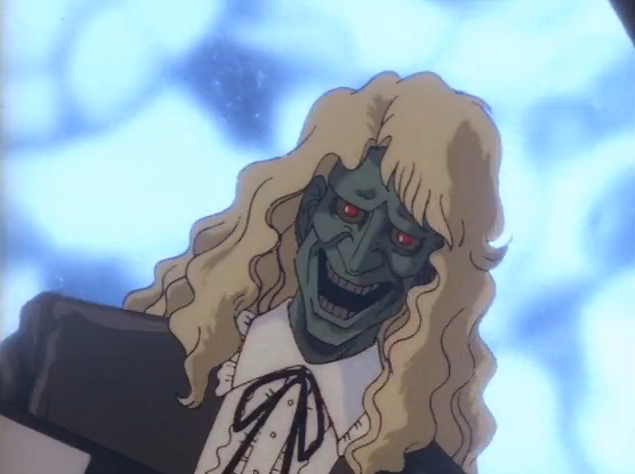 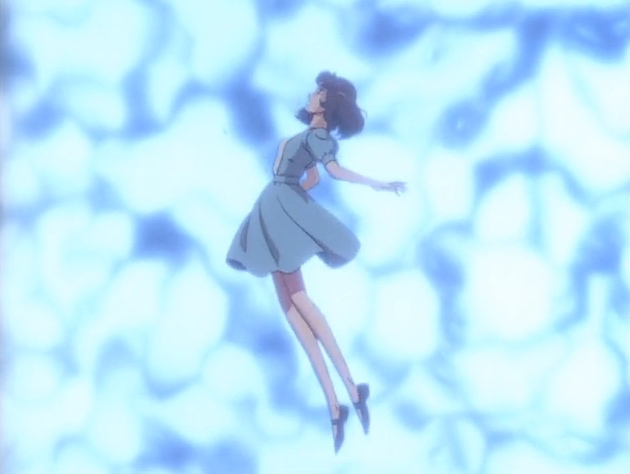 This is supposed to be Nanako spinning. Use your imagination, because I'm too lazy to make a .gif, although it would be a pretty great .gif. 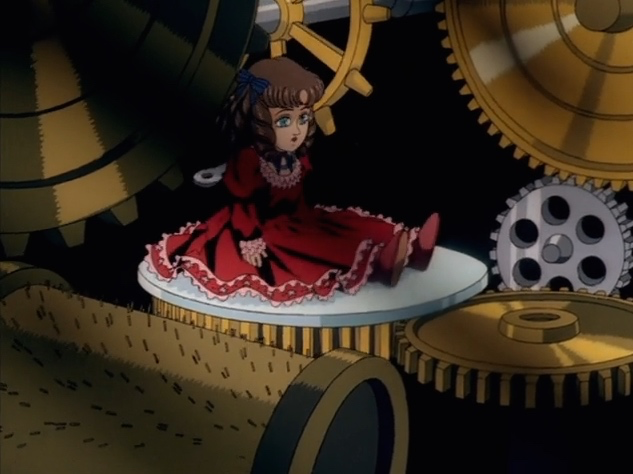 Then the doll spinning, less entertainingly. 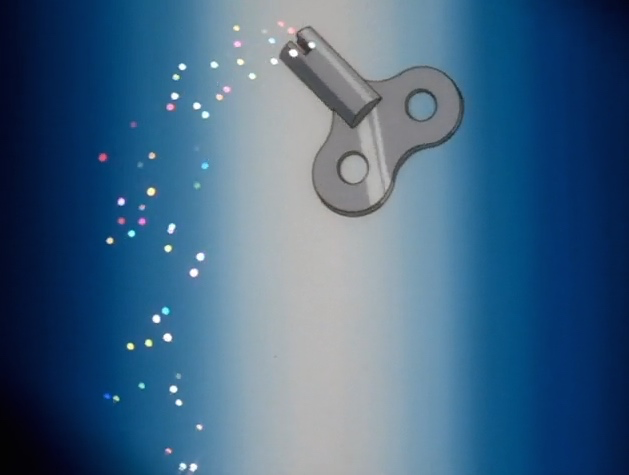 Cue symbol for another portion of Nanako's innocence being gone.

Back in reality, Nanako wakes up from her dream, and ponders what it's like to be attracted to her school's Heathcliff. 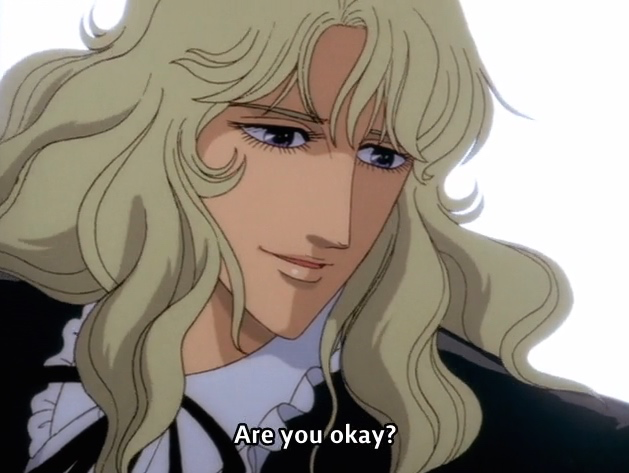 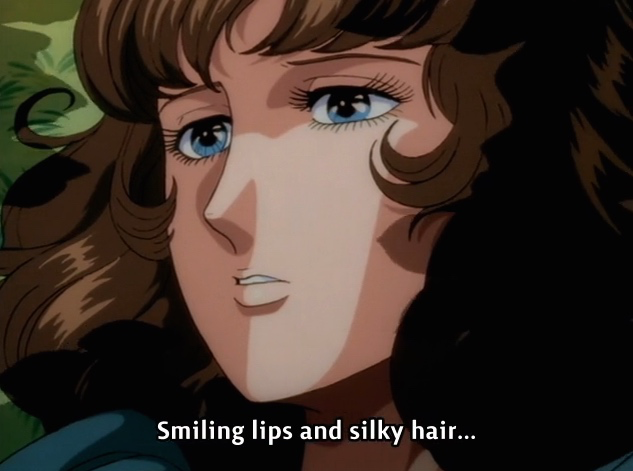 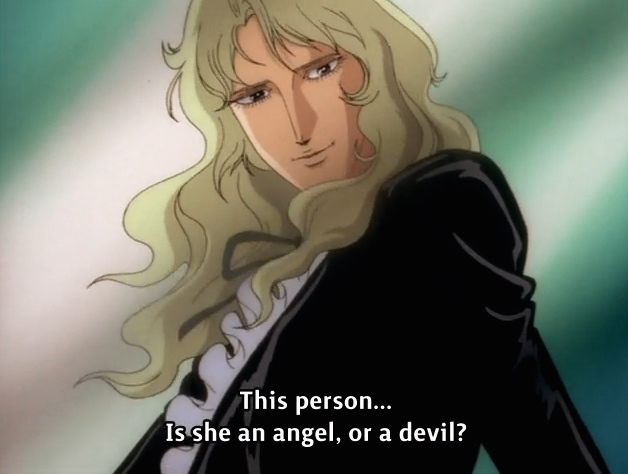 Rei says her point was to show Nanako that she's too good to regularly get high like her, and to some extent Nanako knows that having a thing for someone like Rei (personality-wise, not gender-wise) is a bad idea, but she still has them feelings... and then confesses while crying. (She uses "suki", but the context makes it obvious it's romantic "suki", not platonic.) 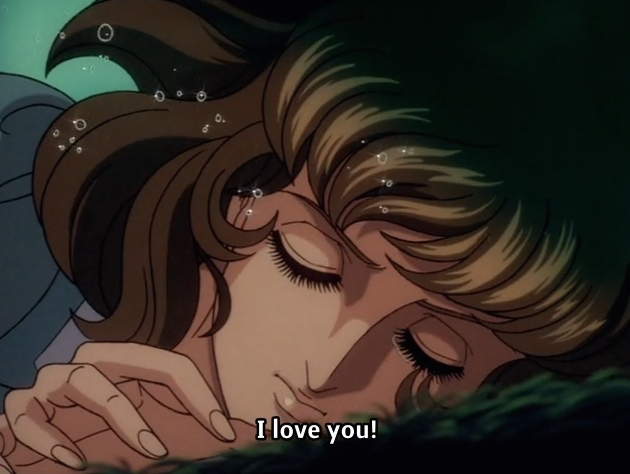 On that not at all awkward note, the episode ends as a bird flaps away. Godspeed, Nanako.

The next episode involves Nanako trying to read Rei's reaction and consulting Kaoru about it. This recap turned out pretty decently considering I wrote it with two straight liquor shots and a sad tolerance for alcohol. I've been meaning to try a couple nips (Jim Beam Honey bourbon and Dewar's Highlander Honey whiskey), and they're pretty decent if you want something concentrated but like sweet drinks. Sadly, they came with no hallucinations of my girlfriend playing a spinning piano while wearing a kabuki mask.
Posted by Katherine Hanson at 12/05/2014 2 comments 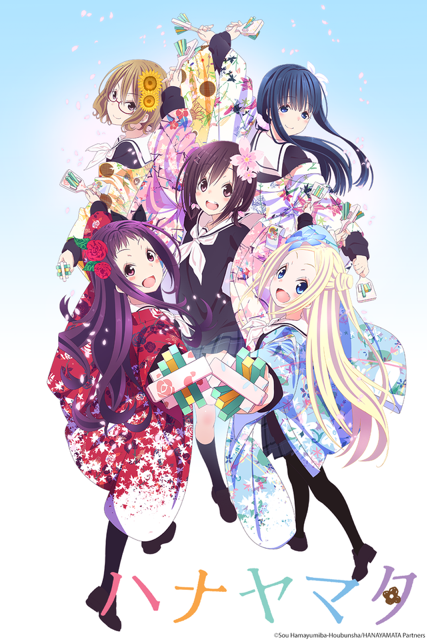 HaNaYaMaTa is one of the better examples of the "a bunch of girls start a club" subgenre of anime, this time focusing on yosakoi.

Naru, like many an anime protagonist, is nice but kind of directionless. She wishes someone would whisk from her mundane life into a different, more dazzling world. Enter Hana N. Fountainstand (I love her name), an American girl who insists that everyone has the potential to be dazzling and introduces Naru to the world of yosakoi dance, which Naru develops a passion for. Hana and Naru start a club consisting of: Naru's childhood friend Yaya, who puts up a cool girl act but has a soft spot for Naru; Naru's other childhood friend Tami, who is your classic Yamato Nadeshiko but learns that it's okay to not always do what's expected of you; and Tami's friend Machi, who is the most mature and buttoned up one of the group, befitting her bespectacled-ness. Their club chaperone is their teacher "Sally-sensei", who works as the cynical adult who cares until episode 7, when the writing for her character becomes inexplicably horrible. The girls also get some mentorship from Masaru, the guy who runs the local yosakoi shop and looks like a yakuza but is basically a big teddy bear.

The series follows the girls forming their club, with each new club member getting at least one spotlight episode, and their preparations to dance in a yosakoi festival. Hana's mom unwittingly causes some drama towards the end by flying to Japan and instigating the most "yup, this is fiction" resolution to a divorce you'll ever see. I'm not complaining since more realism in that plot point would have ruined this series' tone. Befitting this series' iyashikei-ish-ness, everything turns out well, it's only a question of how.

Yuri comes in the form of some crushy interaction early in the series. (My girlfriend dubbed it "the gay dance show" when we watched episode 1.) You have Naru's lily-scented reaction to Hana playing the role of the Prince she wanted to her Princess by showing her a more exciting world, Yaya thinking Naru's cute and being willing to do pretty much anything Naru gives her puppy eyes over, and Naru's googly-eyed admiration of Tami as her ideal Princess. The eau de gay was pleasant, but in my ideal world, it would have gone somewhere instead of being bait-y and thus par for the course for this show's subgenre.

My only other knock on the show is that in episodes 7, 8, and 10, Sally-sensei acts like a stand-in for a creepy portion of this show's intended otaku audience that I never want to meet. I wouldn't have liked it in any show, but it was especially jarring here since until then, the show was something my friend could have shown his 9-year-old anime fan child, and I enjoyed it as a relaxing, optimistic show. It's also baffling because it's an obviously pander-y move, but anyone still watching the show seven episodes in would presumably be happy with it not having any weird shit like that. (The one show with a creepy teacher where I'm not bothered by it is Azumanga Daioh, since its characters react realistically to Kimura and the point is that he's creepy. Sally-sensei is a Frankensteinian combination of the ickiness of Kimura, the wackiness of Yukari, and the caring mentor-ness of Nyamo.)

Despite the baitiness of the yuri and Sally-sensei being turned into the kind of person I want to curb stomp for no good reason, overall this show was pleasant to watch. It develops its characters more than most shows in its subgenre bother to and Studio Madhouse does a much better job on the visuals than they needed to. It also has an unexpectedly great, unsurprisingly dance-themed opening animation.

HaNaYaMaTa is streaming on Crunchyroll. All Crunchyroll Premium members outside of Asia can watch it, and all Free members in the US, Canada, the UK, Ireland, Australia, New Zealand, South Africa, Denmark, Finland, Iceland, the Netherlands, Norway, and Sweden can watch it.
Posted by Katherine Hanson at 12/01/2014 1 comments