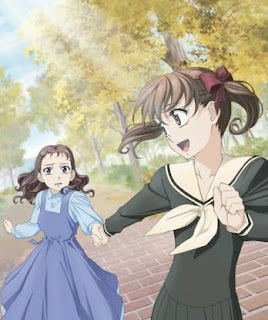 Yes, finally!!!!! XD Now I can watch season 4 on my flat screen (not to mention legally)! I've been waiting for the DVD release date since RightStuf licensed it while it was still airing in winter '09. I wonder if we'll get any nifty tactile "extras" with this box set- even though I'm happy with it either way. Squee, season 4!! <3 ^__^
Posted by Katherine Hanson at 3/31/2010 5 comments

My panel at Conbust was this evening. ^___^ (Well, technically yesterday evening.) I'm pretty tired (from the overall day, not just the panel), but it was fun. I arrived at the con at about 7:40, and found that my panel was listed as an 18+ panel (whoops... o_o;; I could have shown a clip from Mnemosyne, then...j/k). But since I told the con staff that it's okay for people under 18, I didn't need to have someone checking people's I.D. when they entered the room where the panel was. (Whenever I do my yuri panel at Yasumicon, I always need to keep it okay for people under 18. I don't have any problems with that, since I want anyone to be able to come- and I'm not exactly dying to show clips of Shoujo Sect, or anything, anyway.) The con staff were really nice and helpful. ^^

The panel was pretty much the same as the other panels that I've done, although I tweaked a few things. I listed Mist (a good opportunity for the audience to learn what "ladies' comics" are), Rakuen Le Paradis, Comic Lily, Yuri Shoujo, and Hirari in the section on yuri magazines. (Rakuen Le Paradis isn't yuri-centric, but I included it to illustrate how rare magazines that aren't aimed at a single gender demographic are- as well as the fact that it features yuri, yaoi, and straight romance.) There was also a slide that listed some of the manga magazines that aren't yuri-centric, but still have (and have had) yuri titles running in them- like Afternoon, Comic High!, Margaret, and Ikki. (The magazines that are currently serializing yuri series were in red font, while the rest were in black.) In the "Yuri Anime" section, I added Noir (I didn't include it before because I didn't think that it had "enough" yuri, but since it's a kick-ass series with some yuri, and it was influential on the "girls-with-guns" subgenre...), Ikki Tousen, Yami to Boushi to Hon no Tabibito, Kashimashi, Nanoha, Mnemosyne, Koihime Musou, Canaan, Kanamemo (with a warning to the audience about a certain character), and To Aru Kagaku no Railgun.  I also mentioned Madlax and El Cazador while talking about Noir. I showed clips for some of the series, and went through the "Yuri Manga" section- where I substituted Morishima Akiko's Ruriiro no Yume for Rakuen no Jouken (even though they're both great collections), and added Zettai Shoujo Seiiki Amnesian- not because it's remotely good, but because it's A) a spin-off from Kannazuki no Miko, B) popular among yuri fans because of A, and C) likely to be animated. Finally, I capped the panel with the usual "Yuri To Show To People Who You Despise" section, featuring Fight! Iczer One and the Project ICE OVA.

There was a group of three women at the panel who were especially interested in Marimite, on a professor's recommendation- for a paper about attitudes surrounding virginity in anime. (Sounds like an interesting paper. lol) Everyone who came was really nice and mature. (But not stuffy or anything.) I really like Yasumicon and I love doing my panel there each year, but my panel there always seems to attract a small cluster of gangly pre-teens/younger teens who are there for "zomg- lesbiansecks!!" (But they're in the minority. Most of the people who I've met at my panels are cool.) After the panel, I came back to my dorm to relax... -___-

But yup, another fun panel. ^^ My favorite part is always seeing how the audience reacts to the clips. Oniisama E, Azumanga Daioh, KnM ("Robots!?" and "Whoah, if he just looked down, the whole love triangle could have been resolved!"), Sasameki Koto ("That looks like Ultraman!!"), and Railgun got the biggest laughs. I also like seeing how people react to realizing how many series take place in elite all-girls' schools. ("I read a manga set at an all-girls' school because it looked like it had pretty art, but all the characters did was have sex with each other." "Gokujou Drops?") 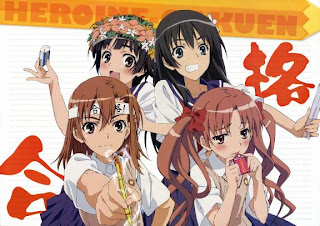 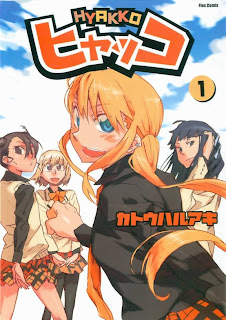 Good news for Hyakko fans! ^^ It looks like Hyakko, Katou Haruaki's slice- of-life comedy manga that received some yuri fan-buzz when the Hyakko anime aired in fall 2008, has been licensed by CMX, and is due for release on October 19.

The anime was a very close adaptation of (what I've read of) the manga, which runs in Flex Comix's free web magazine, FlexComix Blood.

Hyakko is about four girls (energetic Torako, ojou-sama Tatsuki, quiet Suzume, and timid but cheerful Ayumi) who become friends when they all get lost while searching for their classroom on their first day of high school. Most of the yuri (from what I've seen of the anime and read in the manga) comes from their class president Nene, who identifies as bi. (She's a recurring character, and she first appears in chapter 4.)

There's also a brief gag where Torako tells Suzume that she would be willing to give her her first kiss, and Suzume takes her up on her offer. Nothing really comes of it, though.

It's also pretty interesting that Blue Drop is one of the small handful of Sentai titles getting a dub. I don't normally listen to dubs, but I'm happy about this news because it must mean that Blue Drop sold well enough to justify the cost of a dub. ^^ (And Maria Holic didn't- muahaha.) *mutters* In my ideal world, Glass Mask would sell well enough to get the dub treatment also. *snaps out of delusion* Hopefully Sentai's dubbing will prove lucrative for them.

The new Ikki Tousen XX trailer also looks very...Ikki Tousen. Take that as you will.
Posted by Katherine Hanson at 3/19/2010 1 comments

My Thoughts on the News About Hourou Musuko, Conbust Panel Date, and More Mainstream Recognition of A Yuri Manga

Oooh, I can see the clouds below.

Yup, I'm writing this post on a plane to Fort Lauderdale. ^^ (Although it's not the city where I'm staying for spring break.)

I'm quite excited about a new anime series being green-lit for Shimura Takako's Hourou Musuko manga, 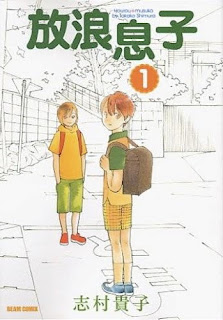 which is running monthly in Comic Beam, the same seinen magazine that serialized Mori Kaoru's Emma. It's a very good series (what I've read of it so far, at least), and I'm looking forward to seeing it when it airs. Hopefully whichever studio is producing it will put as much care into it as J.C. Staff put into my beloved Aoi Hana. (Maybe it'll be J.C. Staff? I wonder if Kasai Kenicihi will sign up for it...this seems like his type of series, also. Of course, it's pointless speculating now.) Hourou Musuko is a slice-of-life series about a feminine "boy" (really a closeted transgendered girl) named Nitori Shuuichi, who is starting 5th grade at a new school. She makes friends with Takatsuki Yoshino, a transgendered boy who most people assume is a tomboyish girl. In true Shimura fashion, there is a large, generally likeable supporting cast. (Although Shuuichi's big sister Maho makes me glad that I'm an only child... >___>; Aside from her, pretty much everyone is likeable.)

Also- my yuri panel at Conbust is going to be at 8:00 p.m. on Saturday, March 27. Directions to the con can be found here, and the schedule for all of the con events can be seen here. I hope to see plenty of people there! ^^

Ack...battery running low. Anyway, major kudos to Takashima for getting more recognition and to Shimura for getting her second manga-to-anime adaptation! ^^
Posted by Katherine Hanson at 3/12/2010 2 comments

Another character trailer for Working!! is up, this time focusing on the katana-carrying yuri character, Yachiyo. Unsurprisingly, the trailer plays up teh yuri. (Yay!) Hopefully the series itself will be good when it premieres later this month. ^^ (It doesn't look servicey so far, which is a plus.)

As for this season...only two more weeks until Railgun ends. ;__; I'm really looking forward to seeing how it wraps up- I haven't seen this week's episode yet. Telestina is so the real villain. (I'm even tempted to try to finish Index again- maybe during summer vacation? I especially want to see the context for this.)

Additionally- if anybody who likes Shitsurakuen wants a copy of volumes 1 and 2 for free, feel free to send me an e-mail at burntsugar28@gmail.com. ^^ Both volumes are in excellent condition, since I'm really finicky about taking good care of my manga- even the volumes that I don't really like. Since I'm going home in a week for spring break (volume 1 of Shitsurakuen is at my house), I'll be able to send both volumes out then. Edit: Please only send me a request for these volumes if you are 18 or older.

I definitely won't post again until this Thursday Friday, since I have a midterm this week. (I should count my lucky stars since it's only one, shouldn't I.) がんばります！
Posted by Katherine Hanson at 3/05/2010 0 comments