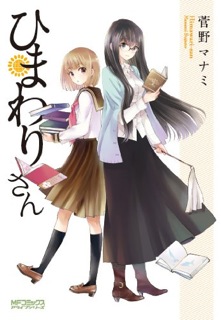 This book was originally intended to stand alone, so nothing on its cover indicates that it has subsequent volumes. After it came out, it sold well enough that it got green-lit to keep running in Comic Alive, the same magazine Sasameki Koto ran in.

Himawari-san is a pleasant, laid-back slice-of-life series about Matsuri, a high school girl who has an undisguised crush on the owner of the old-fashioned Himawari ("Sunflower") bookshop located across the road from her school. Everyone in town nicknames Himawari's owner "Himawari-san" after her shop. Himawari-san is a little gruff, but genuinely cares about her customers (who like her quite a bit in turn) and comes to have a soft spot for Matsuri- but not in a romantic sense, Matsuri's age being what it is.

Like many a manga heroine, Matsuri is cheerful and good-hearted but none too bright, so when she studied for her high school entrance exams, no one gave her much encouragement. Himawari-san believed in her, however, and that was the start of her crush.

Himawari-san helps a few other customers out with their problems in this volume- including Matsuri's younger sister Fuuko, who, amusingly, develops a crush on Himawari-san also, although she's slow to admit it since she was initially kind of a jerk to Himawari-san. My favorite chapter is the Jinbocho chapter, since it perfectly captures the appeal of browsing the stacks at a bookstore, especially when you find a book that unexpectedly captures your fancy.

It turns out that Himawari-san's older brother Kuroizato-sensei, who kind of reminds me of Fruits Basket's Shigure, is a light novel author, and there's a rift between him and Himawari-san. Matsuri pieces together the misunderstanding between them after reading his latest novel and, in a nice example of things coming full-circle, helps them patch things up.

So, like I said, this is a pleasant, pick-me-up kind of series. You're going to be disappointed if you go into it for the yuri (which I didn't, although I liked how no one reacts to Matsuri's obvious crush on Himawari any differently than they would to a teenaged girl who has an obvious one-sided crush on a guy), but if you're looking for a yuri-friendly slice-of-life with likeable characters and no fanservice, this is a solid pick.

As a bonus for folks learning Japanese, like Sasameki Koto, this series is chock full of furigana, so it's easy to read for a seinen series.

Matsuri is adorable, I sort of wish I had that level of confidence growing up. Honestly, it's really nice not to expect anything to happen with this story, each chapter is just enjoyable and filled with fluff that makes you smirk with delight.

That said I'm definitely routing for Matsuri! First love that doesn't end badly is always nice or something like that ~

@Ashlynn- I like Matsuri's confidence also. =) I get what you're saying. I can see it working- Himawari-san reciprocating Matsuri's feelings when Matsuri's older, assuming Matsuri continues to feel the same way. Although given how well she's taken Himawari-san not reciprocating her feelings, I can see Matsuri getting over it without too much trouble. But in short- I can see what you're saying. Going from Okazu's reviews of vols 2 & 3 of this series (which I still have to buy @_@ ), it sounds like Himawari-san has a past that's... an awful lot like Matsuri's present, love life-wise, and I'm interested in seeing how that's handled also.