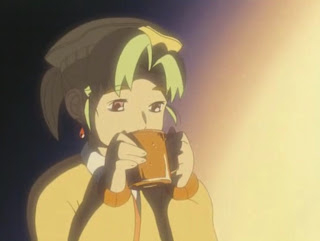 Every piece of animated work must have at least some microscopic modicum of artistic merit- through its visuals, writing, music, something. But Yokohama Kaidashi Kikou is a perfect example of a title that I would recommend if someone asked me for an example of animated art. (I normally divide the titles that I enjoy into two categories: "art" and "popcorn", even though they can obviously overlap to varying degrees. ^^;)

The story takes place in the future, after some sort of unnamed natural disaster has caused the human population to decline. People are living more simply, quietly enjoying life and accepting that they are in the twilight of their era. The main character is an android named Alpha, who is running a coffee shop while waiting for her human "owner" to return. At the start of the first OVA, Alpha receives a camera and message from her owner, courtesy of another android named Kokone, encouraging her to record her memories. The first two OVA episodes showcase the little highs and lows of Alpha's life, culminating in one of the most beautifully memorable scenes that I have seen in any anime.

Quiet Country Café is still slice-of-life, but it has a little more focus as Alpha's shop is wrecked by a typhoon and she decides to go on a journey and explore the world for herself- with Kokone waiting for her return, unbeknownst to her.

Kokone definitely has a crush on Alpha, and even though nothing really comes of it as far as we see, it's still cute and they have plenty of time. :-)

The art is pretty simple, but it captures the mood of the story well and matches what I've seen of the manga art. I slightly prefer the character designs in the 1998 OVA, which look hand drawn and a little warmer, if that makes sense. The voice-acting is spot-on, and the music is a treat, especially the music in the second OVA, by Choro Club. (Choro Club later did the music for Aria.)

The characters are great and the story flows as smoothly as silk. My one potential-nitpick is that, since these OVAs are animating a small slice of a much longer story, I'm sure that I'll appreciate them more after getting the larger context.

Still- it's 4 episodes. It's excellent. You have no excuse not to try it. *determined look*

Yokohama Shopping Log is possibly my favorite anime and manga ever. Nice post. My one point I'd like to suggest is after reading much of the manga, I became fairly convinced that "Owner-san" refers directly to the Cafe's owner, not Alpha's, who is simply keeping it in her care during his indefinite absence (but it invariably gets interpreted as her owner by translators). It's similar to calling the owner and keeper of a bar "Master" in Japan. I also suspect that were it her "owner" she would use one more level of politeness and refer to him/her as "Owner-sama", or such, not "Owner-san". But that's just IMHO.

Though I have never read/watched this series, I have heard nothing but praise from anyone who has read/watched it (it does remind me a little of Aria in terms of gentle pace).

It's interesting to hear about a story set in a post apocalptic world that has not gone to hell.

@ Anon- What you pointed out makes sense. Thanks for mentioning it! ^^ I'm looking forward to starting the manga- it should shine some light on a few things that I'm curious about. ("What will happen to Alpha's shop?", "Will Owner-san ever come back?", "Will Alpha and Kokone "kiss" again? XD", and "Who/what is Misago?")