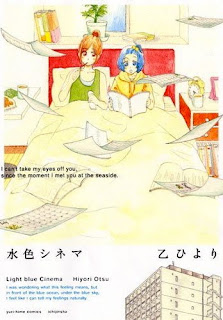 My goodness. I loved reading this manga. ^__^ (For my succinct reaction: "Kyaaa!!") Otsu Hiyori is a veteran contributor to Yuri Hime, and Mizu-iro Cinema ("Light Blue Cinema" or "Aqua Blue Cinema") is my favorite story by her yet. If you haven't read it, you really should.

Yui is a famous actress who is shooting a new movie at a seaside town. When she takes a break from filming and wanders to an isolated jetty to take in the view, a girl named Tae mistakenly assumes that she wants to commit suicide. (The jetty is a well-known suicide location.) But in trying to pull Yui away from the edge, Tae accidentally pushes her over. ^^;; The end.

lol But no- it isn't steep, so Yui's fine, just dripping wet. Tae takes Yui to her house, and lets her use the shower and get a change of clothes. Later, Yui realizes that the pendant that she normally wears, which has a lot of sentimental value attached to it, is missing and she and Tae go back to the jetty at night to search for it.

Believing that it's her fault, Tae jumps into the water to look for it. They can't find it, and Yui jokingly tells Tae that she'd "better take responsibility for it." (Code for: "I really like you, but I'm going to fabricate an excuse to spend more time with you by pretending you owe me money for the things I lost, and making you my personal assistant for the summer as compensation.")

Tae indeed becomes Yui's assistant, and as they spend more time together, Tae falls for Yui while Yui falls more in love with Tae- while still being a little hung up over her ex, Mizuki. Things become complicated when Yui and Tae go to Tokyo, where Yui lives, and Mizuki shows up wanting to get back together with Yui- but Yuri Hime followers know that Otsu isn't going to twist a knife into the heart of the story by pairing Yui with Mizuki and leaving Tae heartbroken. :)

The final scene, back at the jetty, is absolutely adorable. (Especially Tae's misinterpretation of Yui's "I finally got a day off. What's wrong with wanting to use it to come see the girl I love?" line. ^^ Cuuute!) My only little qualm is that we don't see a kiss in that scene. (But hey, considering their plans for the future....) Sorry if this review is too spoilery- but it shouldn't, really, surprise anyone that this title has a happy ending. (I mean- the cover! The author!! And the magazine!!)

The story isn't deep or artsy- but damn it, that isn't what I want from my romantic comedies. (Although Mizu-iro Cinema is as much of a drama as a comedy- but Otsu amalgamates enough humor into it for it to qualify. And "romantic drama" might make it sound more heavy-handed than it is.) I want engaging, entertaining, not-too-"perfect"-but-not-unlikeable leads, strong writing, character and relationship development that feels organic and believable (which would be more difficult to pull off in a short story), and enough doki-doki moments to leave me with a smile on my face by the end. To that end, Otsu succeeds.

There were a few other things that I especially liked. Even though Yui and Tae are both third-year high school students, making the story take place during summer vacation and using Yui's job as an actress as the main plot vehicle sets the story apart from the "two schoolgirls fall in love at school, the end" thing that we've seen a million times before. As with Aoi Hana and Sakurazawa Erica's Love Vibes (which I want to review later), I like how the protagonist had a love life before setting her sights on the person who she wound up with by the end of the story, instead of the usual "You are my first and only love!" type of story. It just feels more realistic to me. (And I know that Aoi Hana hasn't ended and Fumi and Ah-chan aren't together...yet. Close enough.) Additionally, I liked how the story clearly addressed that Yui likes women, without making it feel like an after school special, or as if the story is taking a break from its narrative to explain what "women liking women" is to the reader.

But most importantly- Tae and Yui are really cute together. (Ganbatte, Tae! Ace those entrance exams. XD )

I LOVED this manga!! I posted about it ages ago when Lililicious first released their scanlations and I posted against recently when I read the last chapter!! KYAAAAAAAAAAA!!! Is the best expression to describe it!!! Hiyori Otsu is one of my favourite mangakas!!!

@ yasashiisekai- Haha, I remember you writing that Otsu is one of your favorite mangaka, along with Morinaga Milk. She's really good at delivering on the doki-doki moments in her stories. ^__^

@ shinra- The story ends in this volume, but hopefully Otsu will continue to draw "kyaaaa!!"-worthy stories for Yuri Hime. ^^ (And you can still read/re-read her other story collections.)

I was wondering when you'd review Aqua Blue Cinema!

I liked Aqua Blue Cinema, but I didn't love it. I should preface this by mentioning that Otsu Hiyori is of course one of my (everybody’s) favourite yuri writers and the unrivalled Queen of the Oneshot - IMO! I had some high hopes for the series but I couldn’t find myself embracing it completely for a few reasons.

For me Yui was an enjoyable character, her having her as an established lesbian character eliminated the usual inner turmoil we treaded oh so many times and meant we had more time getting to see the things that make her stand out. I really loved that!

Tae I found to be your run of the mill, dim-witted, hardworking, sincere character. For me she didn't really evolve past those basic characteristic. I found her... a little boring.

Mizuki was the biggest let down in the series. My favourite parts of the early chapters were Yui's flashbacks to her time with Mizuki, when we actually got to meet the girl I found cheery and happy but not likeable. Because the cast is so condensed, if I find I don't love two of the three characters my opinion of the manga is going to suffer.

However, there were still some awesome moments in the manga and I was always very pleased to see it updated. Yui and Tae’s exchange in the last few pages was to die for! You'll find no argument there lol! The yuri was nice, established lesbian, Otsu’s beautiful art - there are a lot of positives as well.

Sorry this is a bit long but it's still rather fresh in my mind. Awesome review!

looks so cute...thanks .. I wanted something like that to read..however I wanna ask ! is it completed yet ? I've read dozens of ongoing manga..and I can't keep track of them !

Thanks again for ur awesome blog *_*

@ Jumana- Yup, it's already been completed and collected into one volume. And thanks- I'm glad you like my blog! ^__^