Only 1.5 Weeks Until Summer Vacatioooon... 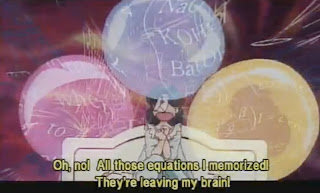 You said it, Ami... Anyone who has seen the first Sailor Moon SuperS special should get the reference. ^^

Until Sunday May 9, I won't be doing any more posts. (This week is my last week of class, while next week is finals week. After my last exam on Friday May 7, I'll be busy packing everything up to go home, and on Saturday I'm flying home. Hence, my hiatus lasting until Sunday.) But after these last couple of weeks are over- *pops confetti* VACATION!!!! And more posts and reviews. ^^ Until then~
Posted by Katherine Hanson at 4/27/2010 2 comments

Augghh: Not directly "yuri" news, but...

THIS is why I encourage people not to be cheap bastards and buy the DVDs when they're available in Region (wherever they live) for shows that they profess to be "fans" of, instead of just illegally streaming and/or torrenting them. Simple supply and demand- if not enough people buy a product for it to be profitable for the people who create it, the people who create that product won't produce it. It infuriates me how willfully thickheaded people can be about this issue.

This reminds me of an incident that happened in the anime club that I belonged to in my senior year of high school. I brought in the first Mai-Hime DVD, which everyone in the club was enjoying watching. While the DVD was playing, I saw a freshman girl showing a middle school boy on his laptop how he "doesn't need to buy the DVDs" for Mai-Hime because he can get it "all for free!" online. I was pissed- I paused the DVD and took that as an opportunity to give them a lecture on why watching illegal fansubs online in lieu of purchasing legal DVDs is harmful to the anime industry. I might as well have talked to a tree, for all that it got through to them. (In retrospect, I know that harshly lecturing somebody like that is generally an ineffective way to persuade them to change their behavior.)

But- maybe the looming specter of the anime industry tanking will get a few people to cough up money to support the titles that they like. The same goes for manga. Buy them, borrow them, rent them, ask for them on your /holiday/ wish list, but don't steal them. (I do read scanlations, but I buy the titles that I like when I can.)
Posted by Katherine Hanson at 4/26/2010 0 comments 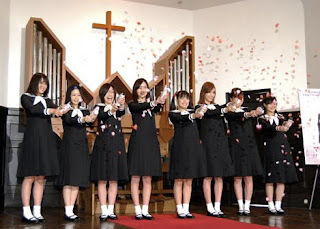 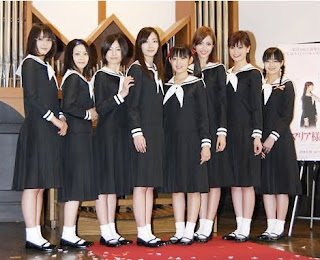 The film is due for release this fall, although the date hasn't been specified. I love the poster- it's too cute!! And it perfectly represents the tone of the story. 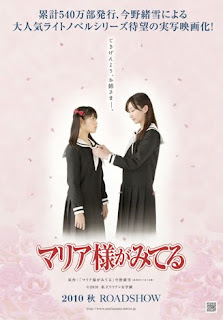 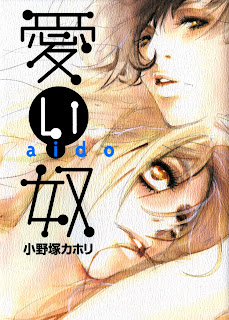 I wasn't sure what to expect from Onozucca Kahori's Love Slave when I began reading it. It seemed like a grittier, more modern version of Moonlight Flowers (a must-read if you're a card-carrying yuri fan and you haven't read it!), but with enough tweaks to turn it into a very different- and arguably, better- story by the end.

The protagonist is Ureha, a successful make-up artist living with her boyfriend-since-college, Ichiru, who works as a teacher at an all-girl's high school. Three months after proposing to Ureha, Ichiru's still waiting for an answer from her. At a cosmetics shop, Ureha runs into Sawori, who reminds her of the female classmate she (almost) slept with in high school. After breaking up with Ichiru, Ureha and Sawori get together, but things aren't quite happily-ever-after... Meanwhile, one of Ichiru's students, Mariya, comes out to him as a lesbian and encounters Ureha and Sawori when she starts going to lesbian clubs. Ichiru also runs into Sawori one day...

I really don't want to spoil too much, since a lot of the fun in reading Love Slave is in seeing where it'll go. (Although it was still really good when I re-read it. ^^)

In the beginning, Sawori seemed like she would be the heroic, Kaoru-esque prince(ss)-on-a-white-horse who sweeps Ureha off her feet and "initiates" her into self-awareness as a queer woman, but refreshingly, Sawori is painted in many shades of grey. (And the manga shows that Ureha was interested in women, albeit much more closeted, before Sawori. Points for that.) Even though I didn't like Sawori much during most of the story (especially in chapter 5...), she ultimately came across as a good person (or at least, not a bad person) who made some very, very stupid choices. None of the characters are sainted (including Ureha), and even the most horrific character has some multi-dimensionality.

Unlike most yuri manga, Love Slave isn't about the inception or growth of a relationship- it's about the growth of its protagonist. I hoped that Ureha would find somebody who she could be happy with, and she absolutely did- just not at all who I expected. :) The ending was extremely satisfying without feeling schmatlzy or mawkish. And that's all that I really wanted.

Story: B+
Art: B+ (I personally really like Onozucca's art style. It's a stylish, slightly loose josei look.)
Overall: A-

A solid pick if you want something more mature than the norm.

Edit: Added a link to my review of Moonlight Flowers.
Posted by Katherine Hanson at 4/16/2010 11 comments

I wouldn't normally buy an omnibus if it's for a series that I already own, but...since Seven Seas' newly (but not conspicuously) announced Strawberry Panic! omnibus will contain "two all-new previously unreleased chapters" along with the rest of the series, I'm sold. -___-;;It's coming out in October 2010. A Hayate x Blade omnibus (collecting volumes 1-3) is due for release the following month. (It isn't coming with any "extras", as far as I know, so I probably won't get it. Although it feels...wrong to have SP! in a larger size, and not Hayate...and seeing Tenchi Gakuen's sword-slinging action in a larger format...damn it. *resists*)
Posted by Katherine Hanson at 4/08/2010 4 comments

I'd been wondering when/if CR would announce a simulcast for Shin Koihime Musou: Otome Tairan. The first episode aired this past week. It was pretty much what KM viewers expect- light, silly fluff with yuri sprinkles and a dollop of service. It isn't any less stupid better than previous seasons, but it was so over-the-top "wtf" that it was kind of fun (tsk, tsk, take responsibility, Bachou!). I'm glad to see CR still picking up yuri-ish tiles. (And I love how their synopsis of the series makes it sound more serious than it really is.)

A new episode will appear on CR every Friday at 11:00 a.m. PDT. Unfortunately, the announcement doesn't mention where Otome Tairan will not stream- I'm presuming that, as with the first (and again I'm presuming, second) season of KM, it will stream everywhere except in Japan, France, Belgium, China, Luxembourg, Andorra, Monaco, Taiwan, and Hong Kong.
Posted by Katherine Hanson at 4/08/2010 4 comments

So-Ra-No-Wo-To was a good show- not great (or even very good), but it was one of the better series that premiered this past winter. Most of its episodes didn't have any sort of ongoing plot (which is fine), aside from the questions of who the "Amazing Grace"-playing soldier who Kanata, Rio, and Filicia had all met was, and how much influence the legend of the fire maidens (and the giant skeleton that Kanata found in episode 1) would have. My favorite episode was episode 7, in which the people of Seize celebrated the Fiesta des Lumiéres, which triggered Filicia's memories of the members of her previous platoon, who all died in combat. It was sad, but it was very good- and it helped that Filicia was already my favorite character. (And that her seiyuu is Endou Aya.)

There were a few other parts that stood out- like the story about the elderly woman who wasted her life pining away for the traveling salesman who had an affair with her, then took her son away for his wife to raise; as stupid as her story was, the ending of it was poignant. (Even though it was still irritating.) I also liked the interaction between Aisha (the Roman soldier who Kanata and Kureha found), and the rest of the platoon. (Filicia certainly has some...interesting interrogation techniques. XD But I also especially liked the part where Aisha forgave Noël for her role in the destruction caused by the "Invisible Reaper.") I didn't expect anything really bad to happen to the platoon (like one of them dying), because this didn't seem like that "type" of show, and the villain (the Demon of Vingt, whatshisname) had absolutely no ambiguity- so he wasn't interesting. The ending was really satisfying, since it provided solid closure and managed to be happy (yay, Rio! ^^) without being too sappy.

The music throughout was nice. I like Kalafina's music, so the OP was pleasant to listen to- although it's not very distinctive. I still don't care for the ED. It's a peppy number that sounds fine after a light episode (like Kanata going shopping on her day off while the other platoon members peddle moonshine to the mafia), but sounds...wrong after something like episode 7.

The yuri stayed pretty thin. I could see Kureha having a crush on both Rio and "Claus", and the two most viable "pairs" for me by the end were Filicia x Rio and Aisha x Noël. (And of course, there was Filicia's interrogation.) But the "yuri" still stems in the fact that it's a show about a group of (mostly) sexually ambiguous female characters who live together, and occasionally come into contact with one another. (I'm sure that a number of prurient-minded fans perked up when Kureha mentioned that, under Filicia's authority, the members of the platoon must bathe together.) The most interesting part for me was piecing together what sort of world the characters inhabit. (A crumbling Japanese school in a Spanish town with a French name?, etc.) That aspect could have been expanded on more. 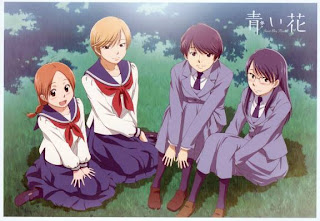 A second season of Aoi Hana has been green-lit!! XD

In a new interview released on J.C. Staff's website, Shimura Takako herself confirmed, "The new season will take a somewhat different path from the manga, but I trust J.C. Staff to produce a wonderful love story with many wonderful surprises for the fans." J.C. staff describes the new season, Aoi Hana ~Zettai Doki Doki Mahou Shoujo Vampire Gao Gai Yandere Jidai~, as "Everything the fans could possibly want!" Shinbo Akiyuki will direct AH ~ZDDMSVGGYJ~, with a new OP directed by Anno Hideaki. Some fans have voiced concern that Shinbo doesn't have enough weed motivation left to bring his characteristic directorial style to Aoi Hana, but he assures his fans that nothing will change in his artistic vision. "Sssssall gooood," he said while supervising the storyboards for creatively placed panty-shots.*

While all of the original seiyuu will reprise the same roles, the three new regular cast members, Ueda Ryouko, Ono Haruka, and a "mysterious new transfer student", will be voiced by Itou Shizuka, Kugimiya Rie, and Hirano Aya, respectively. The air date is still TBA.

*Disclaimer: This is all a lie. But I'm sure you already knew that.
Posted by Katherine Hanson at 4/01/2010 5 comments