The Audio, Slideshow, and Transcript for my Sakura-Con 2014 Yuri Panel 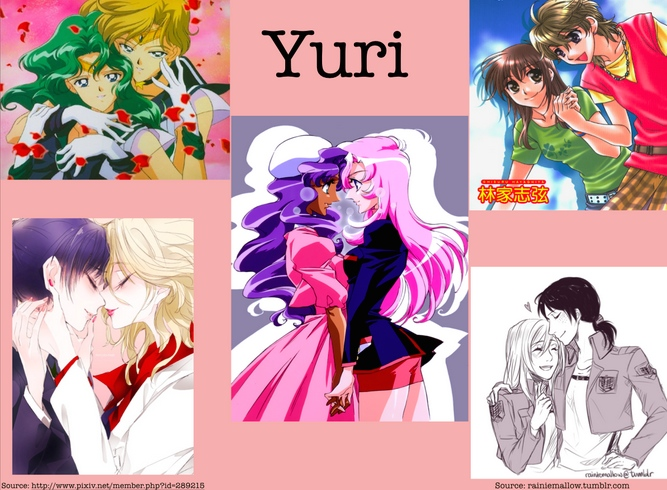 Last weekend my girlfriend Amy (@phoenix_red) and I went to Sakura-Con, where we did a yuri panel on Saturday night from 9:00 to 10:15 pm. In previous years (like here, here, here, here, here, and here), I have written about panels (or panel-esque events) that I have hosted. Rather than just tell you about this one, I uploaded my recording of it onto SoundCloud (link here) and have uploaded the transcription I made of it onto Google Docs (link here.) You can also see the slideshow slides here.

I was initially very annoyed at Sakura-Con because they charged Amy and I admission, since the standard practice at cons is not to charge panelists admission and Sakura-Con didn't make it clear that their policy differed beforehand, but I still really enjoyed the weekend and had a lot of fun doing that panel. Other things I attended: the MINT and Angelic Pretty fashion shows, the latter of which was especially fun even though I'm not interested in wearing Lolita fashion myself; the Attack on Titan Q&A, with Mikasa's voice actress Ishikawa Yui and AoT's producer Kinoshita Tetsuya; the Noitamina panel where Amy and I won a Noitamina commemorative book in a raffle; and the Attack on Titan autograph signing where I had my copy of volume 10 of the manga signed.

The panel was a lot of fun, and it got way more people than I expected. It was a "Whoah!" moment in the best way to see this line on arriving to our panel's room. 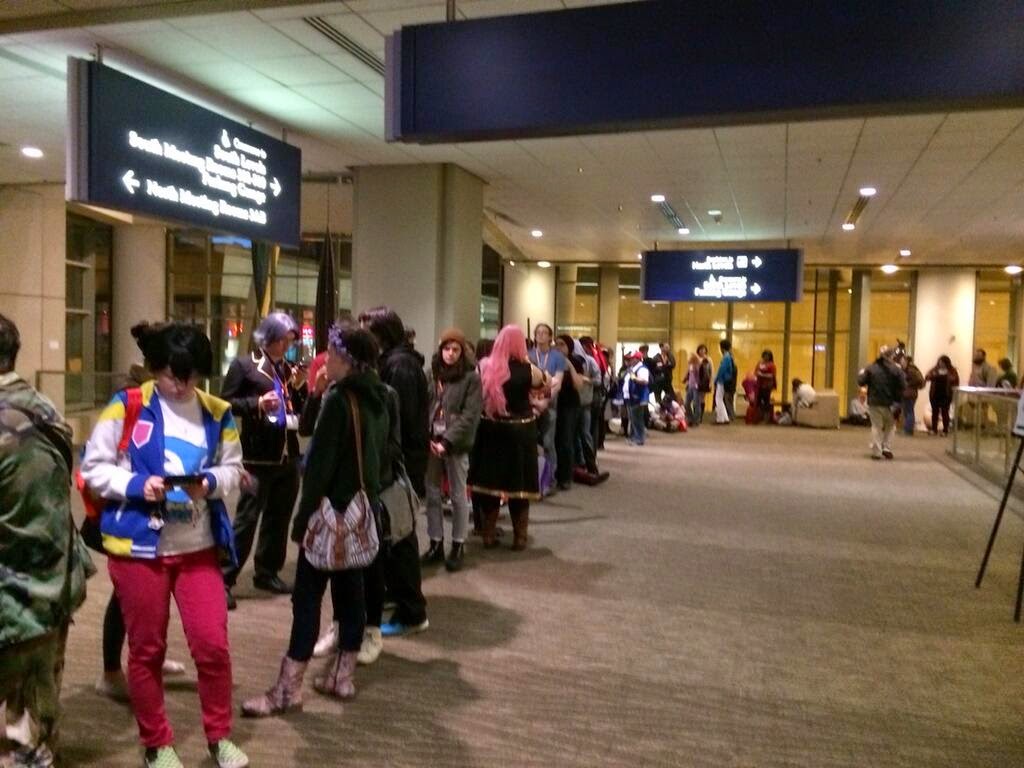 And here you can see the audience below. 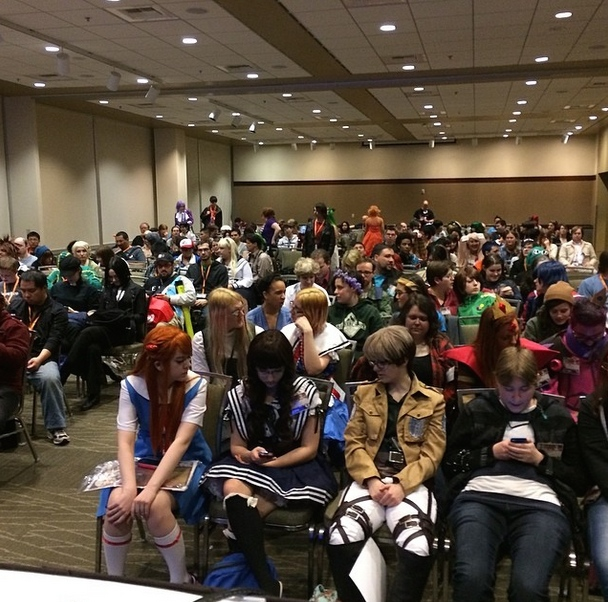 The panel started later than expected because of technical issues, but Amy was a badass and got shit resolved, together with Edward Elric. Before the panel started, one of our moderators, an Ariel from The Little Mermaid cosplayer (I was surprised by how much Disney cosplay there was, even not counting all the Elsas from Frozen) warned us that some people in the audience might ask inappropriate questions because of our panel topic and that we didn't need to answer anything that made us uncomfortable, but that didn't happen. The audience was pretty great.

Amy's and my friend Ben, who designs games including a yuri one mentioned in the presentation (he recently did a BL game also), our other friend Ben, who is the creator of the Licensed Heroes webcomic, and our friend Jake, who creates the Modest Medusa webcomic, were in town for the con weekend and were able to attend our panel. Adding to the coolness, Kelly (azumarrill.tumblr.com) and Audrey (achievement-hunter.tumblr.com), the awesome Ymir and Christa cosplayers I geekily photographed earlier that day 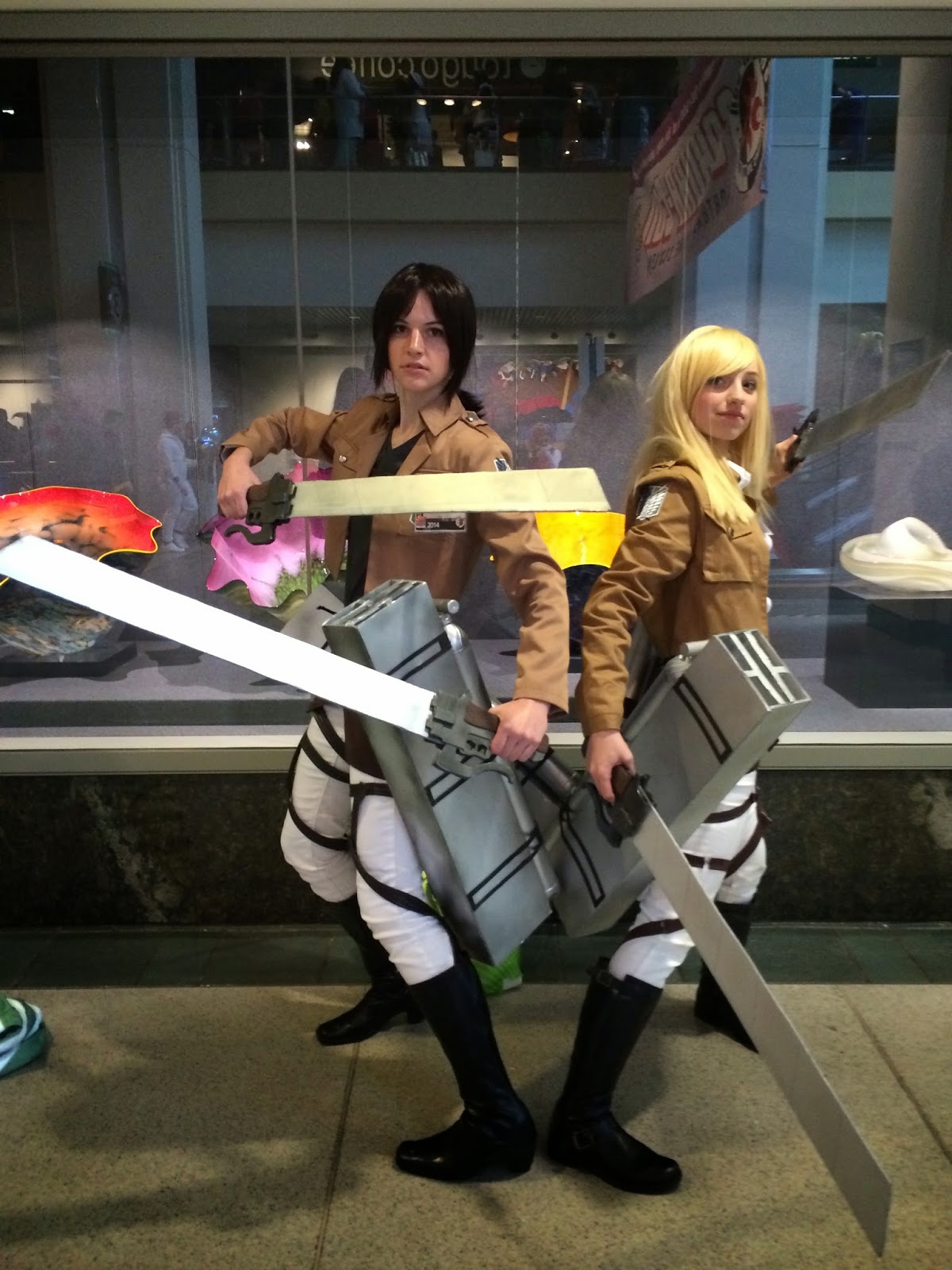 attended the panel also, resulting in this photo after the slideshow ended. 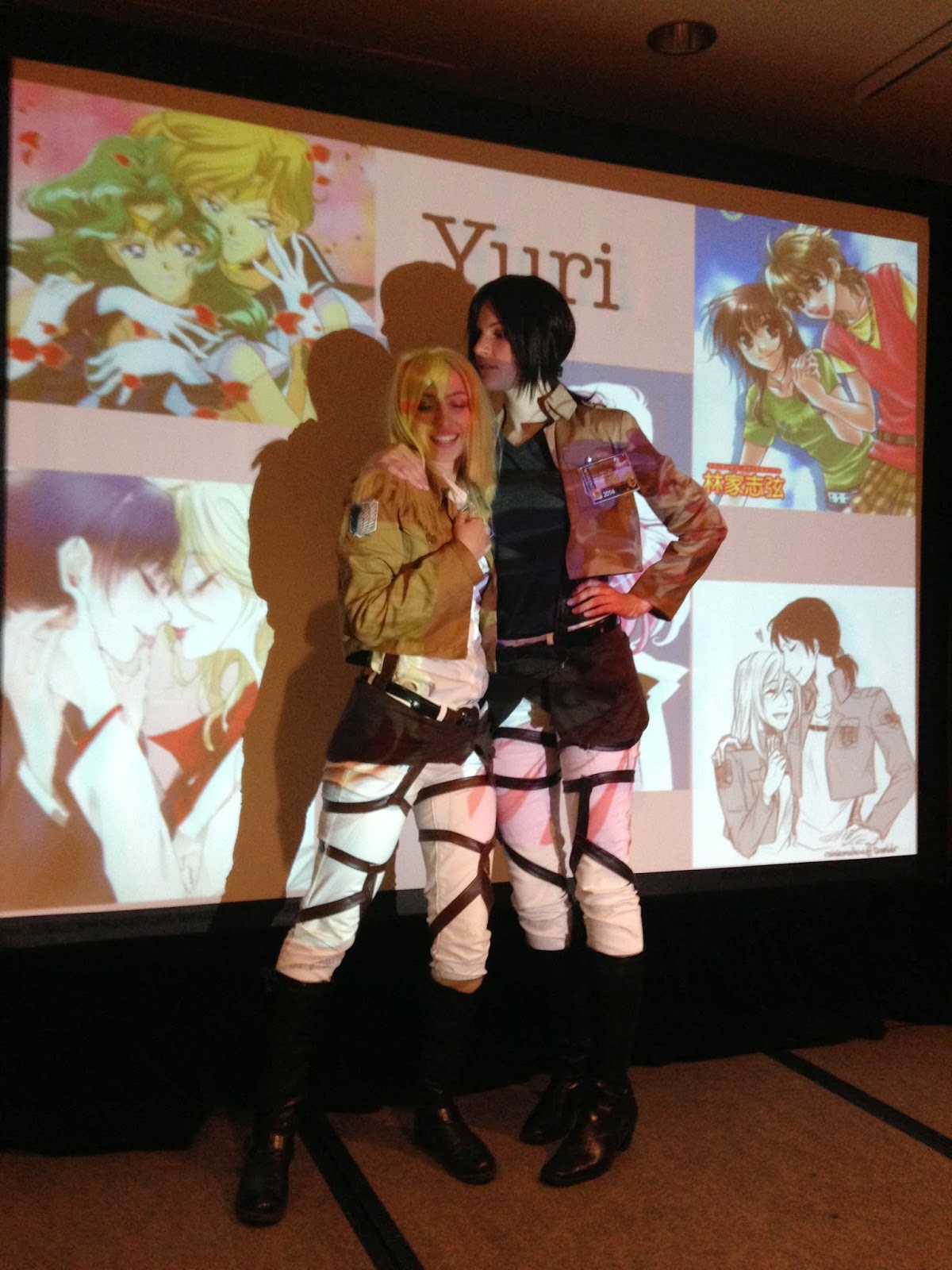 Anywho, it was a lot fun! Panels are basically a way to geek out with other people who are interested in something you like enough to create a presentation about. For this panel, I redid most of the slides to put more emphasis on trends in yuri. When I put together my first panel, back as a senior in high school, I emailed Okazu's Erica asking for panel advice and she was really nice and gave some good tips, so if you want to do a yuri panel and have any questions about it, feel free to ask me.
Posted by Katherine Hanson at 4/27/2014 9 comments Welp, this was dull. Surprising for a show about a girl assassin who falls in love with her female target in a class full of assassins.

Tokaku has been training to be an assassin for years. She also stabbed someone as a small child. She feels shitty about it, and we know that her love interest Haru's love will save her from thinking she is a horrible person who needs to lone wolf it for the rest of her life- kind of like Attack on Titan's Ymir and Christa, except that I don't care about Tokaku or Haru, as individuals or as a prospective couple. Tokaku is stoic and angsty and starts to have romantic/protective feelings for Haru in this episode, while Haru is bubbly and likes Tokaku, and they're both kind of boring.

Tokaku is transferred into an all-girls' school, in a class with twelve other students. All of Tokaku's classmates are assassins except one, who is everyone's target for reasons unexplained for now. This show's promotion made it clear before its air date that ingenuous, pigtailed Haru is the target. Tokaku and the other assassins have picked up on it too, because Haru is the only one whose mannerisms don't scream, "I have sinister intentions and/or a sinister past!" She wants to make friends with everyone and hands out smiley-faced phone charms she made herself right after her class introduction.

I would love it to turn out that Haru is pretending to be a guileless genki girl to make the assassins underestimate her (especially because the knife scars on her thighs, conveniently located high enough to make Tokaku flip up her skirt for a better look at them, indicate that she may have been targeted before), but I don't think this show is smart enough to deconstruct her character type to that extent.

This show does take itself Very Seriously despite the ridiculousness of its premise, though. Unlike, say, Kill La Kill, which has fun with the bizarreness of its premise. (For anyone who doesn't know, I hated KLK when I first tried it and that continued until episode 4, which I had fun watching. After watching episode 5, I knew I was hooked. I started watching beyond episode 1 late in the season and am catching up.)

I will keep watching this series and see if it gets better. I do like the idea of a show starring canonically yuri leads that has a plot for them beyond their relationship- it needs to make me care about the characters and story in question for me to like it, though. I'll see how it goes.

UPDATE ON 04/07: Funimation has announced that they have licensed this series for streaming. In their words, "The first episode of Riddle Story of Devil (aka Akuma no Riddle) will be available for subscribers tomorrow. We'll let you know as soon as we have a confirmed time."

UPDATE ON 04/09: We have a video link (for Funimation subscribers)! Here it is. I know this review was really selling you on this show and whetting your appetite for it. According to Funimation's Twitter, new episodes will come out each Friday at at 1:55 pm CT.
Posted by Katherine Hanson at 4/06/2014 1 comments 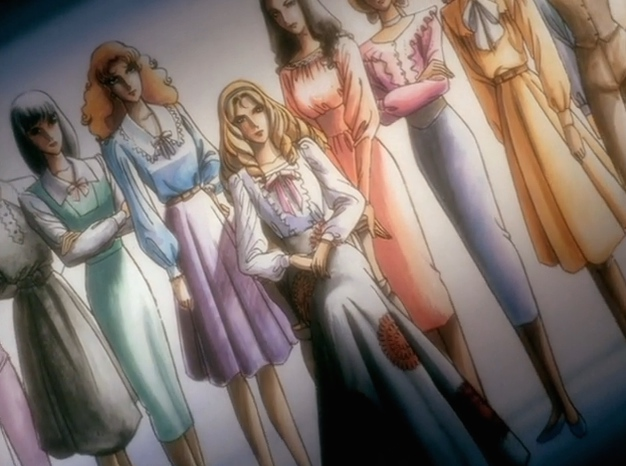 This is when the shoe drops. At least the first shoe. Aya tries to make Nanako give up her Sorority candidacy by being like, "HURR, I DUG INTO YOUR FAMILY BACKGROUND AND YOUR DAD ISN'T YOUR REAL DAD BECAUSE YOU AREN'T BLOOD-RELATED AND HE MARRIED YOUR MOM WHEN YOU WERE FIVE. ONLY BLOOD TIES MATTER YOU DON'T EVEN KNOW WHO YOUR REAL DAD IS, BASTARD CHILD, HRAR GARPH I'M GONNA PUT THIS INFO ON FLYERS AND LITERALLY THROW A MILLION FROM THE SCHOOL CLOCK TOWER SO EVERYONE AND THEIR GRANDMA WILL SEE THEM." 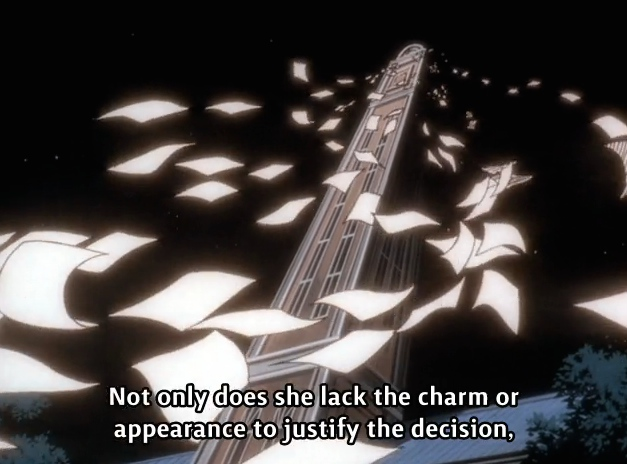 Kaoru rips off the flyer Aya pinned to a bulletin board in a hallway in a scene that reminded me of Utena getting pissed about what Saonji did with Wakaba's love letter, but yeah, only so much you can do when Asshole McAsshat wants to throw gossip confetti from the top of the school. 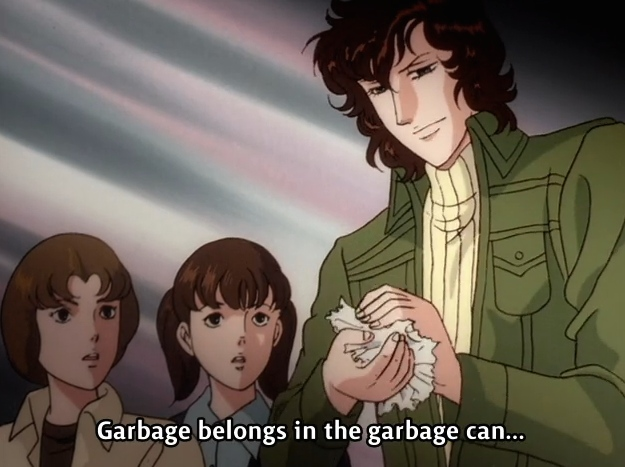 I love that Kaoru not only tore off the flyer, she said that before tossing it at Aya.

Btw, this series emphatically does not do what Usagi Drop and a horde of other manga and anime titles have done by negating family relationships between people who aren't blood-related- Tomoko points out that Nanako's father, the man who raised her, is who she loves as her father, so he is her father, period. 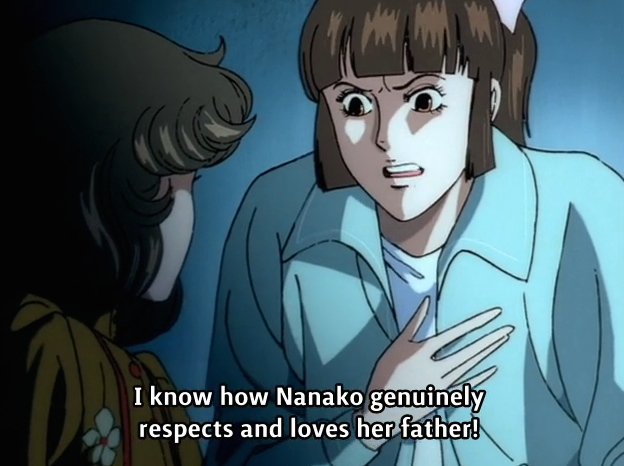 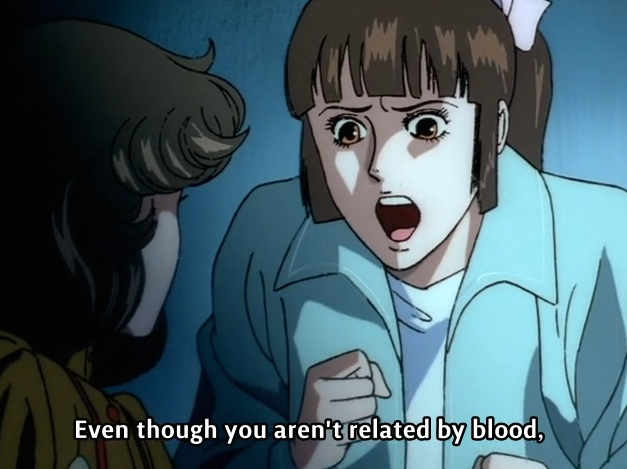 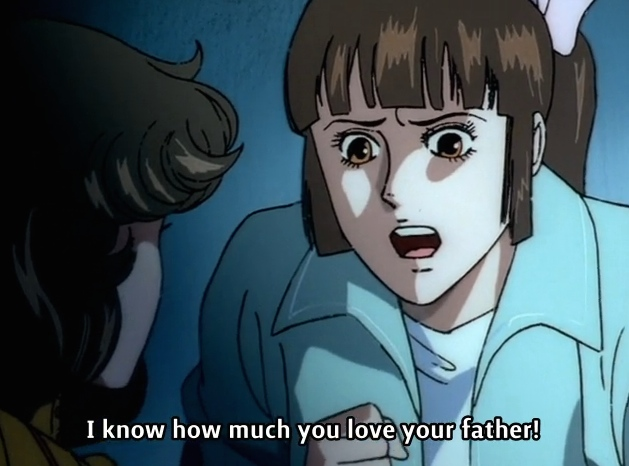 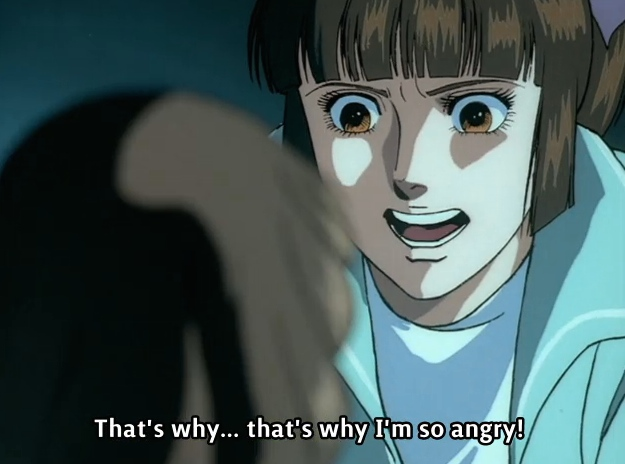 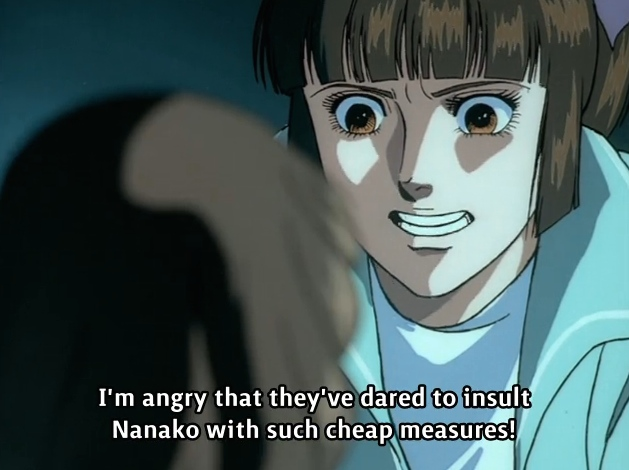 Mariko's attachment to Nanako is helpful instead of weird right now, because she goes all Mama Bear and tells Aya and the other bullies to fuck off in a slightly more polite way than I would when they try to intimidate Nanako. 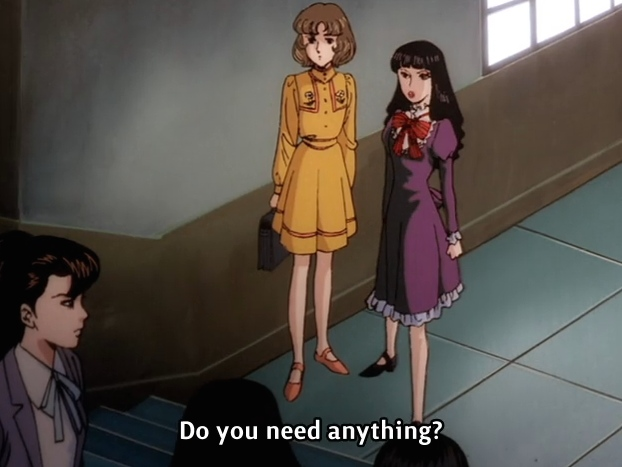 I understand Nanako not dealing with the bullies as assertively as Mariko because she hasn't had to deal with as many problems in her life, and she still does pretty well considering what she's dealing with. She does consider not attending the Sorority selection meeting, but how many people wouldn't seriously consider doing that if they were fifteen at a new school and their schoolmates were bullying them and picking everything about them apart in gossip over it. Luckily, in addition to Mariko's protectiveness, Nanako has Tomoko as a bastion of strength, there's what Kaoru did, and Rei lets Nanako finish crying on her when Nanako accidentally knocks her over while running away after seeing the bulletin board. 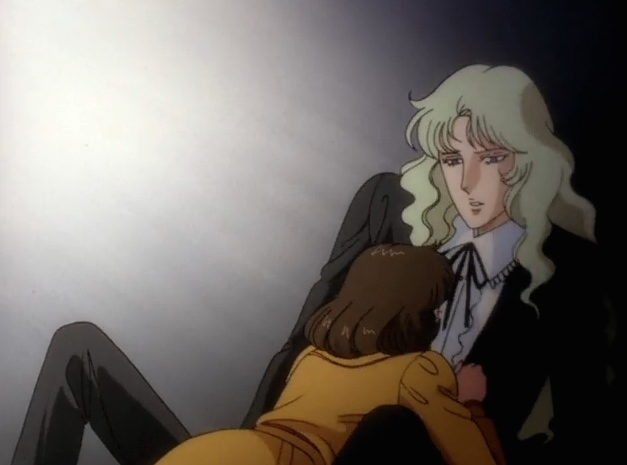 Nanako has some support, and it's fine that she needs it, because again, try being in her shoes without it.

Mariko helps again by saving Nanako from having her Sorority chances ruined completely by a scheme of Aya's, and the episode ends with the question of how Nanako can salvage her chance of becoming a Sorority member after being over two hours late to the Sorority selection party. 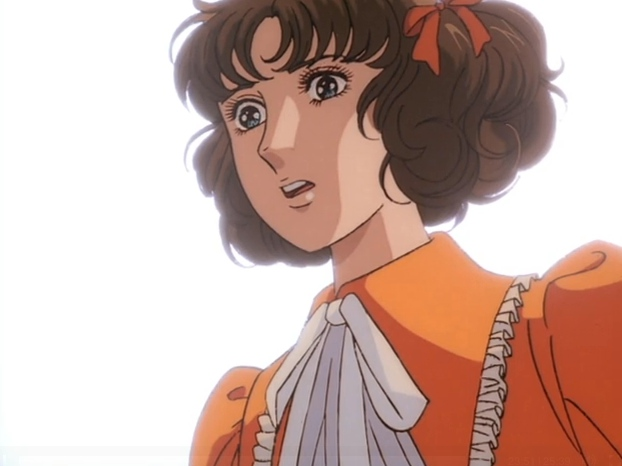 On a more flippant note, I like that so much of Nanako's bonding with Tomoko is over baking and sweets, 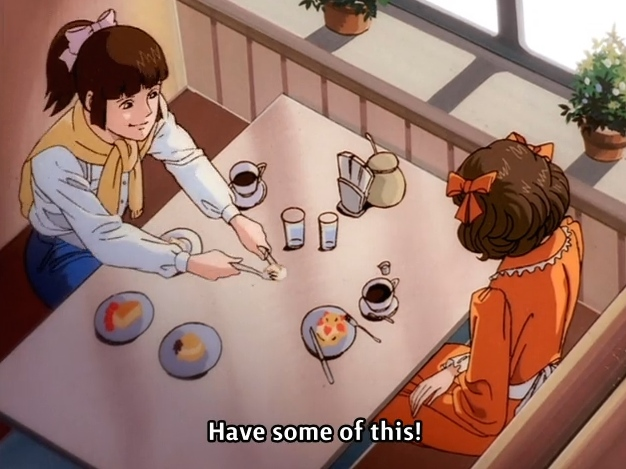 because I am a pretentious foodie and geeking out over food and baking and sharing edibles I've baked are things I like doing with those I'm close to.
Posted by Katherine Hanson at 4/01/2014 0 comments