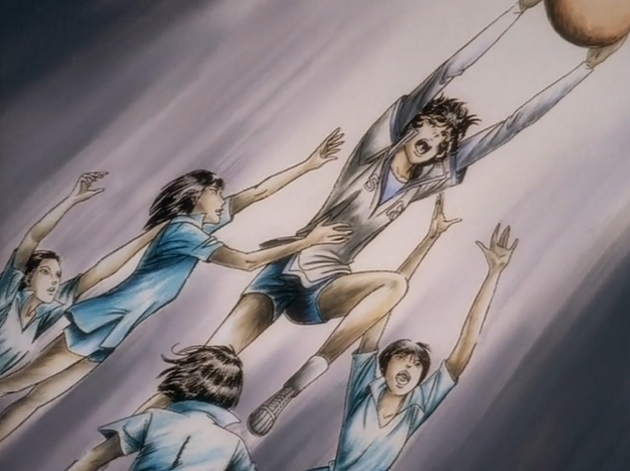 In this episode, Oniisama E becomes a sports show.

We open with Rei chilling in bed, getting a phone call from Kaoru, who is nostalgic for how they used to compete against each other in basketball in middle school. Rei is like "God, not this again" because Kaoru has brought it up before to try to convince her to re-join the basketball team.

Kaoru makes it clear that playing for Seiran's basketball team is like shilling drugs for a crime gang- once you've helped them, you can never really leave. 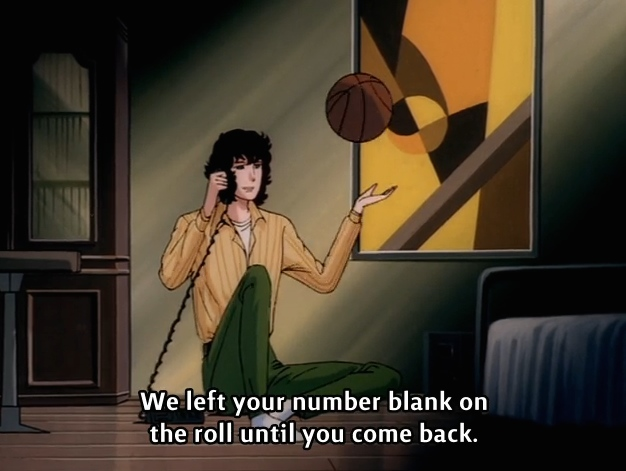 Next we see Kaoru practicing shooting at Seiran at night, with Rei walking up to comment in a very theatrical/Rei-like way. 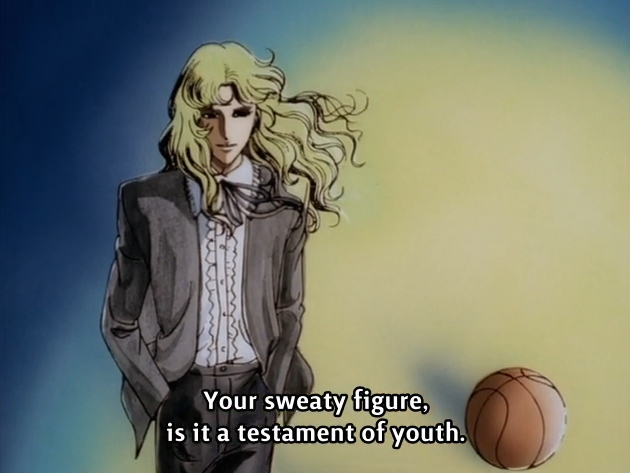 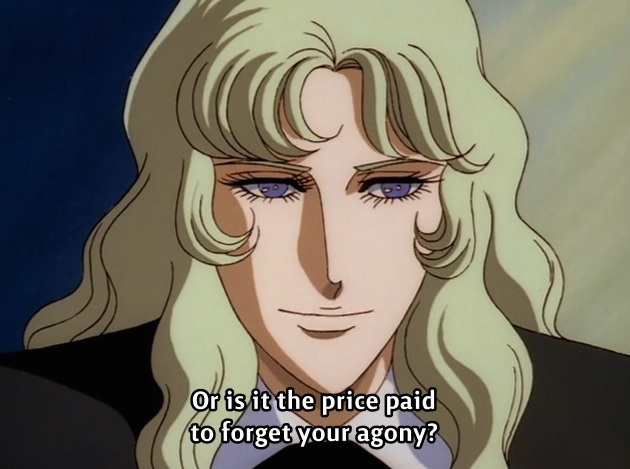 Kaoru is like "I'm glad you're here to play!", but Rei is like "No, I just came to school at night to chill", because who doesn't do that. She clearly used the same sixth sense to find Kaoru that she used to find Nanako at the beach.

They have some banter, and Rei is casually like "Oh yeah, one of your fangirls has been watching you from behind that tree." Kaoru is like "Who are you?" to the silhouette that is obviously Mariko. Mariko runs into the woods, and there is a hilarious chase sequence that involves Rei giggling while running sideways through the woods. In a horror show, she would probably make a good villain. 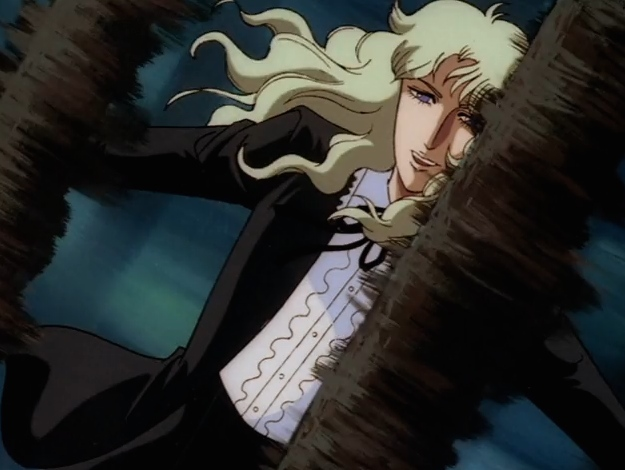 You know Mariko is tsundere for Kaoru because she's like "I-i-it's not like I was hiding in the woods for you, or anything!"

Mariko admits she's worried about Kaoru's condition since her first comeback game is tomorrow, and gives her a nicely wrapped present before running away. 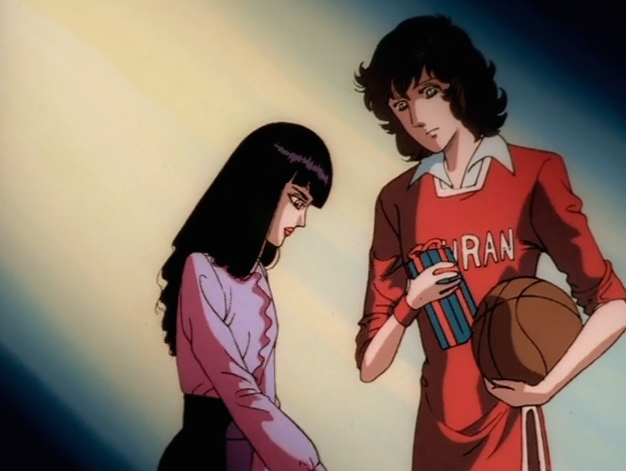 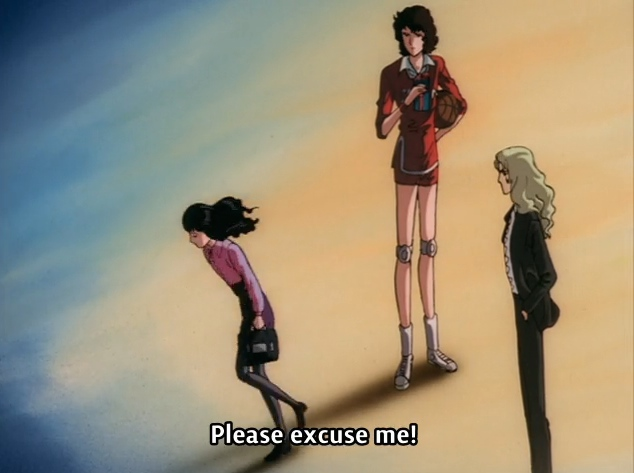 While the hiding-behind-a-tree thing is reminiscent of her behavior when she was obsessed with Nanako, everything else about this scene feel more awkward blushing schoolgirl than creepy, which I think illustrates the shift her character is undergoing. Guess it helps that A) she did realize she became hella creepily possessive and B) even if she didn't and tried the same thing here, a more seasoned student like Kaoru would be harder to pull that kind of thing with than the baby lamb finding its legs that Nanako was when she started Seiran.

We see Nanako in her room, just letting Takehiko know that for once, everything is going pretty well, even though we know whatever allowed Fukiko to find out that Nanako became Takehiko's pen pal will let her know that Nanako ignored her order to stop writing Takehiko.

On the commute to school, Mariko tries to excite Tomoko into wanting to see Kaoru's basketball game with her and Nanako, but Tomoko's too disinterested in sports and too straight for it to work. 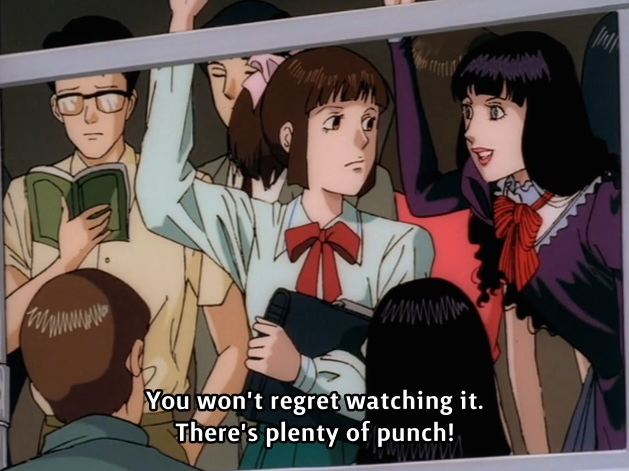 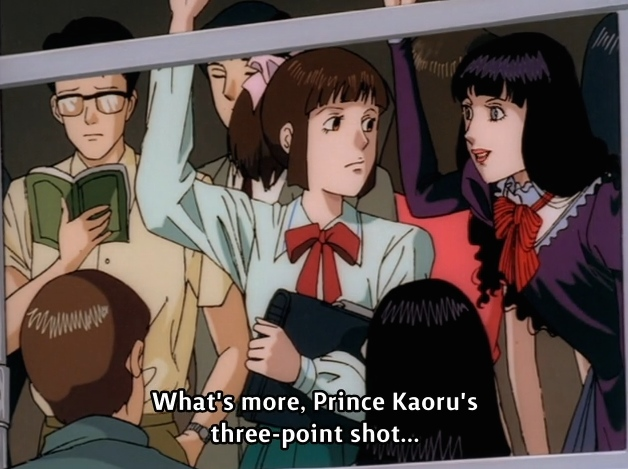 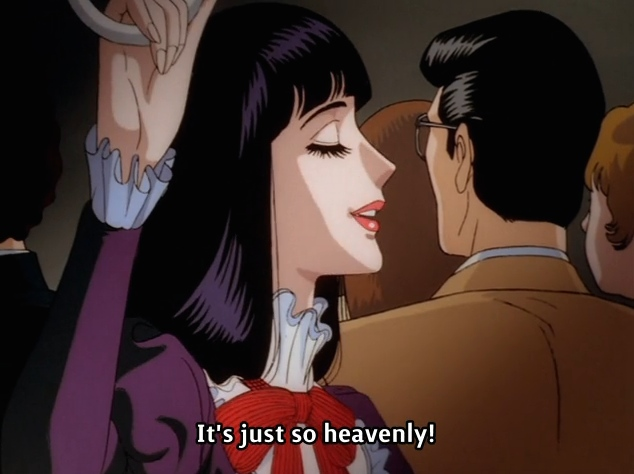 Tomoko ribs her about it, but Mariko pretends she isn't interested in butches. 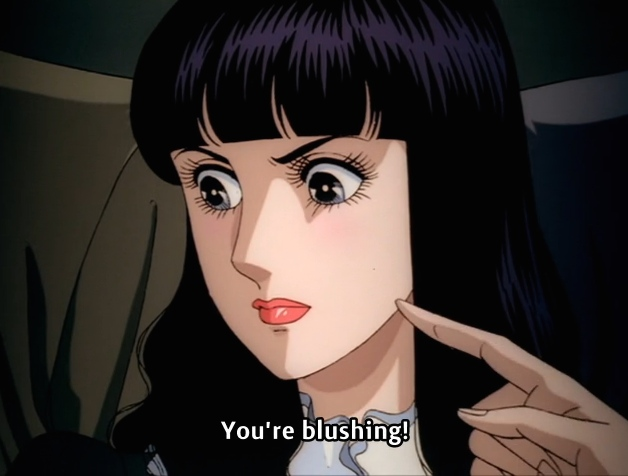 At school, Nanako and Mariko see Kaoru being fangirled over even more than usual, and Mariko is like "Harumph, she doesn't even like that kind of behavior" and walks away.

Nanako and Rei have a short, friendly conversation, and Nanako is extra-chipper while thinking it's going to be a great day.

It's time for the game. Kaoru's coach gives her a pep talk about how doing her best is what's important, but Kaoru responds with the polite version of "Fuck that, I'm going to win." Once she's alone, her speech about winning turns to the subject of her trying to forget lost love and suddenly there are fireflies and she's naked. When I watched this scene next to my girlfriend and went "Awww" she looked just in time to see Kaoru's butt, which was awkward timing. 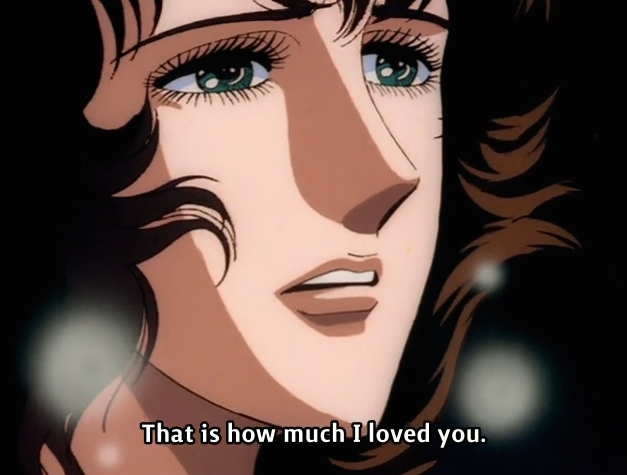 Fukiko and her two righthand women show up dressed like they're going to a gala to give Kaoru a bouquet. Kaoru effectively tells Fukiko to fuck off because of her treatment of Rei, including the fact that Rei doesn't play basketball because Fukiko forbade it.

The game starts and we get some imagery from the perspective of the students comparing Kaoru to Genji, in keeping with her school nickname. I always found that comparison amusingly inappropriate because Genji is a horrible person, despite the novel he is in wanting us to think otherwise. (But I know, it's Kaoru's looks and grace that are being compared to his even though their personalities are completely different.) 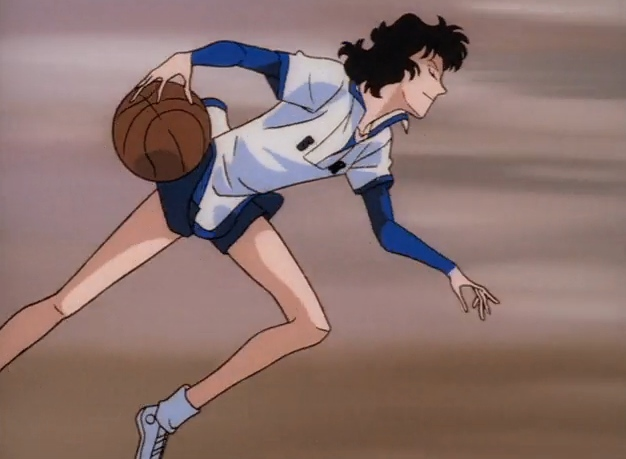 The way Kaoru's basketball dribbling is directed looks a lot like Utena's, so as a bunch of other people have noted, given Oniisama E's very distinct Osamu Dezaki directorial style and obvious influence on Utena, it's pretty clear the way Utena is animated playing basketball is a homage to this series.

The opposing team decides to pile on Kaoru. As they start racking up points, the other students are annoyingly like "Why isn't Kaoru single-handedly fending off this entire team going after her?" even though they know she just got back from being so sick she had to skip a year of school.

Kaoru gets a fresh rush of GUTS or whatever powers anime characters to suddenly pwn their opponents. Her coach is worried, but as an athlete, she is happy to be able to feel like she's pushing her physical limits again. We see that her love of the game can't make her forget her sad lost love because she suddenly looks like she's playing surrounded by nothing but fireflies, 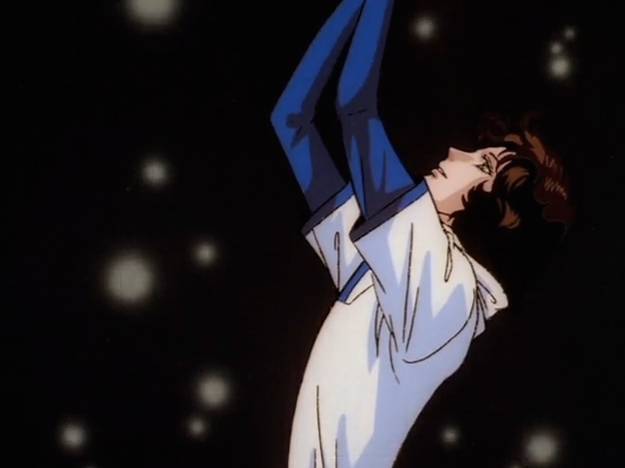 like the fireflies in her sad flashback, but that bit of symbolism is cut short by some girl playing dirty and elbowing her in the chest. If someone intentionally elbowed me in the chest, there is a decent chance I would punch them back, but because Kaoru apparently had surgery there, she bleeds and collapses.

In a moment that probably fueled the Kaoru and Rei shippers, Kaoru refuses anyone's help and calls for Rei. 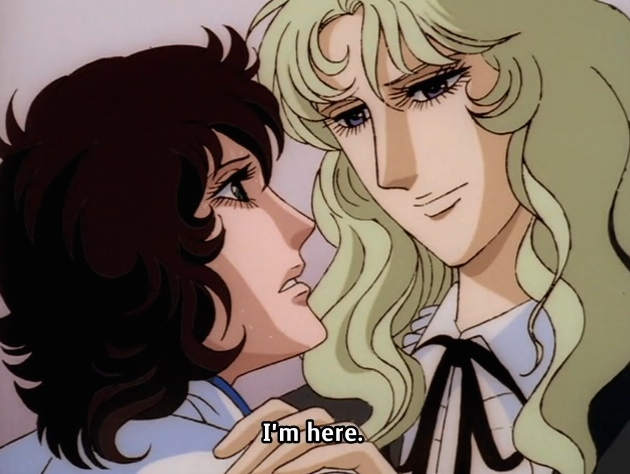 Rei starts to take her to the infirmary, and Kaoru insists that she play in her stead.

Rei does an awesome job and is cool, but I still feel the need to share this screencap. 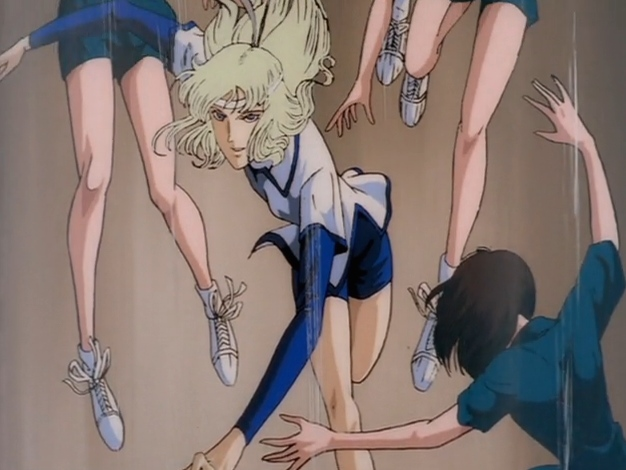 Nanako notes that she looks more alive than she has ever looked before. Like me, Nanako finds hyper-competence sexy.

We get a scene of Fukiko being pissed while riding her horse because a Sorority member told her about Rei playing, although she has the comfort of knowing Seiran lost the game. 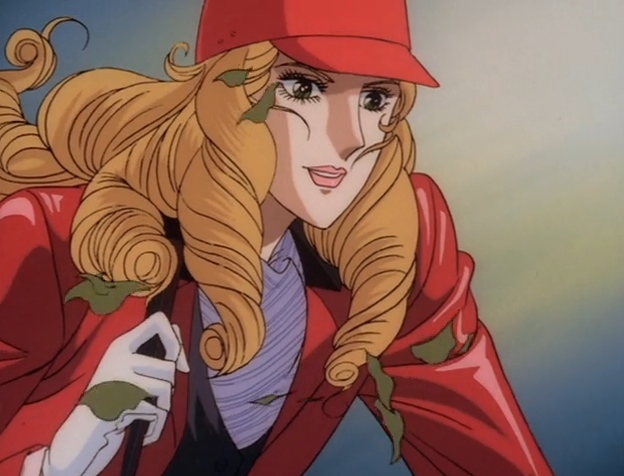 Rei finds Kaoru at the hospital and recounts the rest of the game, and like Fukiko, they laugh in response, but in a way that shows they're still happy with what they were able to do.

Mariko practically pushes Rei aside to get in and see how Kaoru is. She goes tsundere again, but drops any pretenses when she realizes Kaoru is genuinely glad she came.

Nanako has a realization about Mariko 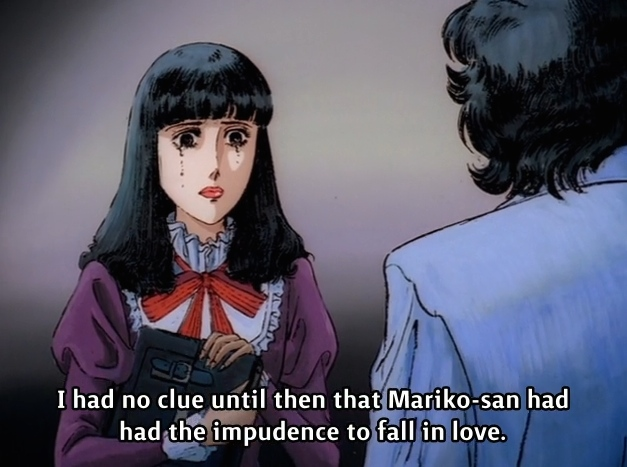 and quietly leaves with Rei.

The next episode involves Nanako being jealous of Mariko's ability to be open about her feelings for Kaoru, and Fukiko trying to bring Rei back under her control.
Posted by Katherine Hanson at 10/11/2014 4 comments