Ramblings on Fun Home: The Book and Musical 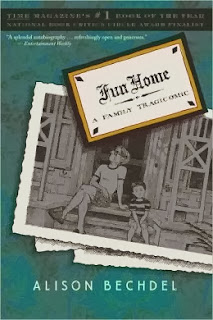 Alison Bechdel's Fun Home (2006) is pretty great. Fun Home is an autobiographical memoir that has been adapted as an off-Broadway musical. It isn't every day that an excellent musical starring a lesbian is adapted from a graphic novel I found riveting, so I'm reviewing it together with the graphic novel here.

The graphic novel follows Alison's memories of her childhood and college years, focusing on her relationship with her dad. After Alison came out as gay in college, her mom told her that her dad is gay, though closeted. As someone who gave up an international career he liked to take over his family's funeral home business (dubbed the "fun home" by Alison and her brothers) in his small hometown and tried to pass as a straight man, Alison's father resented his life. He took it out on his family- mostly by being both cold and temperamental- and secretly pursued men (and, grossly, some high school boys).

Alison's family lived in a large, old house that her dad obsessively re-modeled to look like a Victorian mansion- a symptom of his general obsession with maintaining facades.

Alison filters her story through a heavily literary lens. She illustrates her and her parents' relationships with allusions to the works and lives of writers like James Joyce, F. Scott Fitzgerald, Henry James, Colette, and Shakespeare, as well as some Greek mythology. The musical cuts back on the literary references save a few, not counting Alison and her dad's general love of books, so it may be more your speed if you didn't care for how much the book relied on references to illustrate its points.

Alison's coming out in college is fueled by a combination of her reading lots of books with lesbian content (which I relate to as someone who devoured lesbian media in the process of figuring myself out, like a gajillion other queer women) and her getting together with her first girlfriend Joan. The graphic novel emphasizes the media-consuming component of her coming out more, while the musical emphasizes the first girlfriend component, giving Alison's relationship with Joan more of a romantic, meet cute feeling also.

The musical also preserves little Alison's early butchiness, contrasting it with her dad's effeminate tendencies in a non-caricaturish way. Little Alison even gets a musical number about her feelings about an older butch she sees at a diner.

One of my favorite musical numbers is "Changing My Major to Joan", about how over the moon Alison feels after sleeping with Joan for the first time. Another favorite musical number is the fake commercial Alison and her brothers make for the funeral home, because it's adorable and very seventies, befitting when Alison grew up. All of the songs are good, but the one that stuck with me the most is the number little Alison sings about what she wishes her life was like, with the people in her life participating as happier versions of themselves.

The art in the graphic novel is second-to-none in its expressiveness, and the musical's actors (including the three actresses who play Alison as a kid, college student, and older adult looking back, respectively) similarly do a fantastic job bringing the people in the book to life. The musical also does a great job preserving the settings of the book, right down to the cockatiel painting in Alison's father's library.

Both the Fun Home book and Fun Home musical hurt when they're supposed to (Alison's father's probable suicide is present in both versions) and are funny and sweet when they're supposed to be, and I highly recommend both. They won't necessarily be equally your cup of tea, but they're both worth trying if you get the chance. I really liked Alison's observations in the book of people and her life and how your views of your parents can change as you get older, and enjoyed the musical's interpretations of them. I tore through the book and would gladly watch the musical again.

The Fun Home musical has been successful enough to get three extensions on its run, so you can see it at New York City's Public Theater at 425 Lafayette Street through January 12. Tickets can be bought here.
Posted by Katherine Hanson at 12/30/2013 0 comments 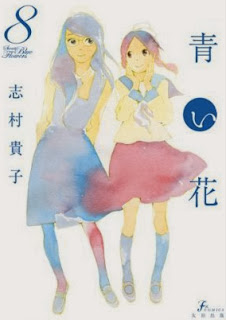 I haven't followed any series' run as long as I've followed Aoi Hana's and I never tired of it, so reviewing this final volume feels a little bittersweet. Some may remember that I hyperventilated on Twitter after I read the news that it would wrap up soon, because I wanted to follow Fumi longer and the situation between her and Akira was very unresolved at the time. I wanted to believe in Shimura Takako's writing, but feared the story might not resolve satisfactorily. I am happy with how this series ended, though.

All of the non-Fumi and Akira couples we know happily remain together. Akira's brother Shinobu and Mogii are still dating, Kyouko and Kou get married, and Orie and Hinako, already married (if not legally), get one of the best, most wonderful scenes in this book, continuing the uptick in yuri manga promoting marriage equality in recent years. Also, I will never complain about seeing a couple I like in wedding dresses.

Earlier in the book, Hinako deals with a student who spreads rumors about Hinako's sexual orientation after Hinako gently rejects her. Thankfully, the rumors ultimately don't do any harm to Hinako's career- perhaps because the rumor-monger is from the student newspaper, which has a bit of a trashy tabloid reputation.

We see Sugimoto again when Akira and Kyouko go on their senior class trip to London. Sugimoto has better realized how shitty her behavior was when she dated and broke up with Fumi, causing her to apologize to Akira. Akira uneasily wonders if her dating Fumi is similar to what Sugimoto did. I don't think so because she is more honest with Fumi than Sugimoto was and has Fumi's interests in mind.

Akira and Fumi's doubts culminate in their breaking up, which I kind of expected when I read volume 7 (reviewed here), although I wasn't sure whether it would last or be a catalyst for figuring things out (especially on Akira's side) and realizing they are both in love and getting together for good.

Since I said I would be happy with Fumi winding up with another girl given enough development of their relationship or her winding up with Akira and I am happy with this volume, it's pointless for me to try to be vague about how things end for Fumi and Akira. ^^;

My sweetie commented that she is glad Fumi and Akira broke up before getting back together because it was good for them to figure themselves out more (again, especially Akira) before trying to build a lasting relationship, and I agree. (Btw if you're looking for a story with a similar theme- two people who get together after it didn't work out because one of them needed to do some growing, you might like Torino Shino's Ohana Holoholo.)

We end this series with Fumi and Akira as young adults, happy together, looking forward to seeing where things go. Two pages in this book (a.k.a. the rose petal pages) indicate that their relationship will turn out to be lasting love.

I would gladly follow more of Fumi's life, but I am happy with where this final volume leaves her.

This volume doesn't contain any bonus stories, but there is an afterword in which Shimura Takako continues her penchant for interacting with her characters with an amusing take on Fumi and Akira. My copy, which I picked up at Kinokuniya, also came with the cute Aoi Hana x Hourou Musuko crossover you see below. I assume the final volume of Hourou Musuko has the other half. 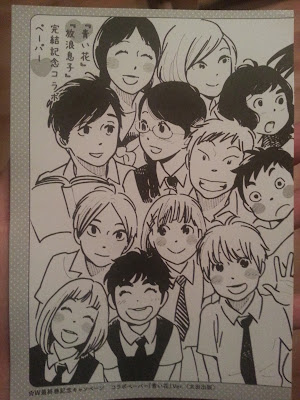