This Series So Far: Inugami-san to Nekoyama-san episodes 1-5, plus an update on Akuma no Riddle 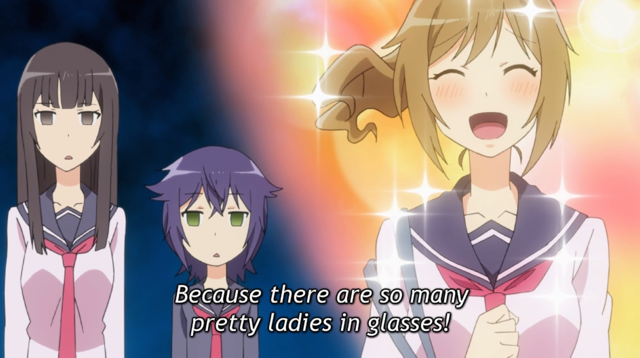 This is just about the easiest series in the world to write about. It's three and a half minutes an episode and set to be one cour long. Like the last anime adaptation of a Comic Yuri Hime manga, Yuru Yuri, Inugami-san to Nekoyama-san is a slice-of-life school comedy. Like many a 4-koma adaptation, it has a lot of puns. The puns in this series are built around the joke that almost every character has a word for an animal in her name and has characteristics of that animal.

Our leads are Inugami Yachiyo ("inu" means "dog") and Nekoyama Suzu ("neko" means "cat.") Inugami loves cats, but she's very excitable and earnest and eager to make friends and her ponytail wags. (I actually think the animation for her ponytail is a cute touch.) Nekoyama likes dogs, her hair has points that look like cat ears, and she reacts to hyper-energetic Inugami pretty much the same way a cat would react to a dog bounding up and trying to play with it. You also have Nezu Mikine ("nezumi" = "mouse") who is the shortest of the group, eats a lot of cheese, and is more active at night, and Ushiwaka Yukiji ("ushi"= "cow") who, uh, has big boobs. Finally you have Inugami's best friend Aki, whose name just means "autumn" and doesn't have any animal-like characteristics. She's the straight man to her friends' eccentricities, especially Inugami's.

Inugami is as unsubtle about her crush (without straying into creeper/non-con territory like some similar characters) as a rainbow cannon firing into the sky. Nekoyama reciprocates and there are a lot of gags based on their mutual interest, but they aren't dating, per se, or talking about the elephant in the room that is what their feelings could mean. It isn't nearly as servicey as Sakura Trick- although the catnip drink licking gag is awkward and something you never want your parents to see you watching- but this series doesn't seem as interested in developing its characters' relationships, although Nezu and Ushiwaka seem to be an item. It's alright and doesn't outstay its welcome at three and a half minutes an episode. I expect it to remain pretty much the same, going from what I've heard about later in the manga.

Inugami-san to Nekoyama-san is streaming on Crunchyroll. It is available worldwide everywhere except Japan.

Also, I'm almost caught up on Akuma no Riddle/Riddle Story of Devil. It became a lot better after episode 1, so ignore my earlier apathy if you didn't previously and check it out at least through episode 2- episode 3 if you want to see Haru be badass and proactive in saving herself and Tokaku. North American viewers can watch it on Hulu without having to register. Episodes found here. Viewers in Europe (aside from German-speaking territories, the UK, Ireland, and Scandinavia), the Arab League, and the Middle East can watch it on Crunchyroll. Episodes found here.
Posted by Katherine Hanson at 5/12/2014

Akuma is also streaming on hulu it turns out! http://www.hulu.com/riddle-story-of-devil

@Helen- I just noticed that also- but thanks for pointing it out! I've updated the post!

I'm loving Akuma no Riddle. It's a nice change of pace from the classic slice of life Yuri series. I just wish Hayate X Blade had gotten an anime

@drawnseeker- It is a nice change of pace- and as an action fan, I'd like to see more plotty, actiony series with yuri leads like it. I don't expect HxB to be adapted because its author had it moved from a magazine that gets a lot of anime adaptations to one that doesn't, but one would be awesome.